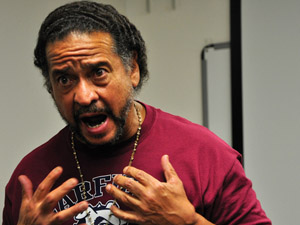 “You don’t have to go to college to know that the death sentence is racist, doesn’t curve crime and costs too much,” Melendez said.

Melendez was sentenced to death in 1984 and spent nearly 18 years of his life on death row for a murder he did not commit. When Melendez was put on trial, he did not speak much English and was not fully aware of what was going on.

“When they first showed the pictures (of the crime scene) in court and the jury looked at me with hate in their eyes, I got scared,” Melendez said.

It only took the judge and jury five days to convict and sentence Melendez to death.

While on death row, Melendez was constantly tormented by when he would be sent to the electric chair, which was the form of execution in Florida at the time. He considered committing suicide, but his faith and family kept him alive.

In 2001, a confession from the true murderer that had not been used in Melendez’s trial came to light and Melendez was set free shortly thereafter. The state of Florida gave him $100, a pair of pants and a shirt as reparations for the 17 years, eight months and one day he spent on death row.

“I’m very angry about it,” Melendez said. “But it motivates me to do what I’m doing. I’m trying my best to do something positive with it. All I have on my mind is to abolish this.”

Melendez advocates for people like Leo Jones, who was a fellow death row inmate and friend to Melendez that also had little evidence against him, Melendez said. Jones was put to death in 1998.

“I’m not saying, ‘let these people out,’” Melendez said. “Just don’t kill them.”

Laura Khrayan, a junior and psychology major, was especially touched by Melendez’s words as she has someone very close to her in jail right now.

“Can you imagine spending 17 years of your life in prison for something you didn’t do?” Khrayan asked. “But now he’s motivational and is making a difference.”

Proposition 34 would replace the death penalty in California with a life sentence without parole for those convicted of crimes like murder. Melendez feels this would be a step towards correcting the justice system in America.