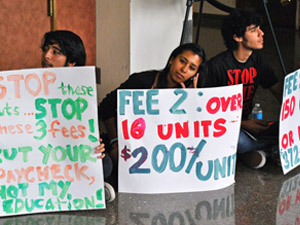 Amidst a bomb threat, midterms, an earthquake drill and preparation for this weekend’s Big Show, a little after 10:30 a.m. a group of students, led by the activist group Students For Quality Education (SQE), staged a sit-in in the lobby of the Oviatt Library to gather signatures to stop student fee increases.

The sit-in was organized to protest the three looming student fees that CSU board of trustees will be voting on in Long Beach at the CSU chancellor’s office on Nov. 14.

Students were encouraged to sign the electronic petition addressed to the board of trustees, urging that they vote against three fee increases. Protesters briefly informed students of the fees and guided them to two laptops near the entrance of the library where the petition was available.

With students in the midst of midterms, fee increases are in the back of their minds, said Mike Canon, a sophomore CTVA major.

“They’re not paying too much attention to it—to these fees,” Canon said. “I personally don’t know much about it because I’ve been studying for my midterms. I had two midterms yesterday, two today plus a group project.”

Canon was originally studying for midterms when he received a text that there was a sit-in happening at the library.

Jorge Garcia, Chicano/a studies professor, was present at the library to support the sit-in. A graduate of Fresno State, he remembered when tuition was only $50 a semester.

“We made 90 cents an hour working in the fields and you could afford it (tuition). You lived at home, worked for 10 days and you had your fees for the semester,” Garcia said.

With a tighter budget for universities, many are suggesting that the fees and subsequent tuition hikes are necessary. However, Garcia disagrees with that argument.

“The state is the eighth largest economy in the world,” Garcia said. “What do you mean we can’t afford to educate our people? This is nonsense. Where’s all this money going?”

Amy Ingram, 22, a senior liberal studies major, was working at the library when SQE and the students first began the sit-in. After her shift ended, she stood in line with the rest of the students to sign the petition.

“It affects me,” Ingram said. “It affects people I know. Education should be put first, and it’s not.”

Edgar Ramos, 22, an art major and member of SQE, wanted the student body to be aware of these issues.

“We want to inform students about the issues,” Ramos said. “There are petitions to sign. There are meetings to attend. Many times our governing bodies don’t inform us on these issues and fees until they’re already passed. We have the power in the university to make a change.”

The sit-in lasted until 4 p.m. with more than 200 electronic signatures generated since the morning, according to Jocelyn Silva, gender and women studies major and SQE member.

Marianne Afifi, associate dean at the Oviatt Library monitored the sit-in, walking from one group of sitting students to other groups standing and talking. Afifi wanted to make sure no one was blocking the turnstiles or doorways.

“They were carefully arranged,” Garcia said. “So that you could get to the turnstiles. The only thing that blocked the turnstiles was the group signing the laptops, maybe they needed a couple of more laptops. There were probably 15 to 20 people waiting to sign the petition (at a time).”