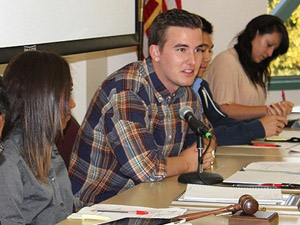 The Associated Students passed a resolution in support of Proposition 30, Gov. Jerry Brown’s tax initiative that would temporarily raise income taxes on earnings over $250,000 per year and increase sales tax by one-fourth of a cent.

The resolution was authored by Senator Sarah Garcia, representing the college of education. It states that “The CSUN student government and its board of directors will take an active role in advocating for Proposition 30 and its benefits for education and the state.”

A.S. Vice President Christopher Woolett encouraged the senators to inform their constituents of Proposition 30, as many students are still unclear about what the proposition will do.

“Nowhere in the text of the proposition does it mention the CSU,” said Woolett. “It’s really funding for ‘K-14,’ meaning K-12 schools and community colleges.”

He explained that the California government promises not to cut money from higher education if Proposition 30 passes, but that their promise is on good faith and not written in the bill.

The A.S. also reported that with over 13,000 ticket sales, the Oct. 20 Big Show would be the biggest it has ever been.

At $10 per ticket, the show has already generated $130,000. According to A.S. President Sydni Powell, the funds will go towards a possible spring show or to next year’s Big Show. Extra security had also been hired for the event.

A.S. senators are required to be at the show to help students through the lines and answer questions. A.S. General Manager David Crandall reminded the senators about their responsibility to their constituents.

Powell said that as long as the senators work the lines, they could “go have fun” afterward.

The A.S. did not discuss Thursday’s bomb threat.