Dinner, mystery and murder at CSUN 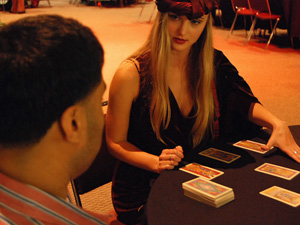 >>>>CORRECTION: The USU holds the annual “Murder Mystery Dinner” show and not the CSUN Theatre Guild.

The USU hosted their annual “Murder Mystery Dinner” show on Friday night in the Northridge Center, entertaining guests at a nearly sold out event.

The improvised show was an interactive experience for the audience. As guests were seated, characters mingled with them, sitting at their tables, and introducing themselves.

“I’ve never been to a murder mystery show before,” said sophomore Janet Rodriguez. “I like how everyone’s in character and really sticks to it!”

The cast, which was completely made up of students, were all dressed in 1920s period clothing, with some even smoking fake cigarettes. Characters ranged from a French doctor and charming southern belle to the promiscuous housemaid and the drunken housewife. All of the characters were being blackmailed by the host, Eugene Salvage (played by Will Mercer) and so they all had motive to kill him.

As the characters began to bicker and their grievances were revealed, a gunshot and a scream could be heard. Before finding out who was murdered or who the killer was, guests were served dinner from StoneFire Grill.

After dinner, guests discovered the butler had been shot, and mayhem ensued. The cast ran between tables, asking if anyone had see anything, and occasionally accusing guests of being the killer.

As the evening progressed, three more murders occurred. While the characters tried to discover who the murderer was, many people in the audience started taking notes on their programs to try to solve the mystery.

The dinner show is held annually by the CSUN Theatre Guild to promote their activities. The entire event is planned, written, directed, costumed and performed by the students of the Theatre Guild, which is a club on campus. Students can check their Facebook page to find out more details about the club and their meeting times.