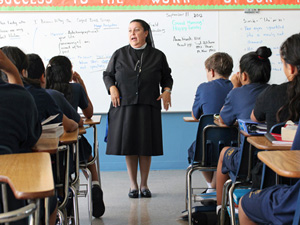 “We never immigrated to this country — this is our country, therefore we aren’t immigrants.”

These words were shared with Sister Francina Vivier by her Uncle Frank when she was younger, and the pair would discuss U.S. history at home.

However, at school, her teachers offered a different version of events.

“I remember teachers right away would say, ‘But you know, right now, let’s focus on what the book says. And the books says that there was a war, and the U.S. won the war,” Vivier said.

She would go back home and tell her uncle Frank and he would apologize for her teacher’s ignorance, saying that she didn’t know what she was talking about.

Now a teacher of language arts and religion at Our Lady of the Holy Rosary School, Sister Francina Vivier, 51, graduated with a degree in Chicana/o studies from CSUN back in 1987.

Vivier attended University High School where she had problems relating to the literature that they would read in class.

“I was completely turned off,” she said. “My senior year, I had 1.6 grade point average and I was on the verge of not graduating.”

“MEChA made a huge difference in my life because it provided a great support system,” she said. “Many of us were the first ones in our families to go to college. Many of us had to work and also help at home and we provide support for one another. When we needed to study we studied together. If someone didn’t have a book, we loaned our book to one another.”

One night at SMC during a MEChA meeting, Dr. Rudy Acuña spoke on the roles Chicana/os in U.S. history.

“It was just incredible to hear this historian, this doctor of history — a Chicano historian — talk about my history,” Vivier said.

After hearing Dr. Acuña, Vivier said that’s when she knew she wanted to go to CSUN. By the summer of 1980 she was attending CSUN.

While Vivier was in college she worked at Pacoima Elementary, which is where she found her passion for teaching.

“There I realized the need for Latinos to be in education,” she said. “A poor school in a poor neighborhood and, sad to say, a lot of the teachers were there to collect a paycheck and neglected a lot of the students.”

After she graduated in 1987, and since she didn’t have her teaching credentials, she went to Saint Sebastian’s looking for a job as a teacher.

“There were no openings. And two or three days later I got a call and Saint Sebastian’s said they needed a third grade teacher and I said ‘I’ll take it,’” she said.

While working at Saint Sebastian’s Vivier met the Sisters Servants of the Blessed Sacrament. They were teaching at the school with her and they ignited her interest for religious life.

Vivier started going to mass with the sisters and began to question why they were teaching at the school since they weren’t getting paid.

After a while, they invited Vivier to a retreat and there she felt that religious life was her calling and joined the Sisters Servants of the Blessed Sacrament.

One day at the school, the sisters invited Vivier to a retreat for people with an interest in religious life, she replied, “For the last few months, I’ve just been having these questions and wanted to know, but I didn’t know what to do.” After the retreat, she felt “at home” at the convent, Vivier said. A year later, she decided religious life was for her.

“My commitment to social justice is because of my experience in college,” she said. “And (I) have been able to embrace and fully understand social justice within the church… and this comes from being in MEChA and times being in the classroom.”