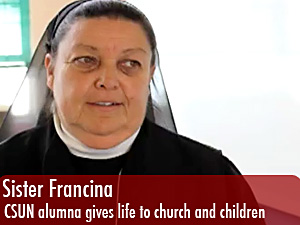 “We never immigrated to this country — this is our country, therefore we aren’t immigrants.”

These words were shared with Sister Francina Vivier by her Uncle Frank when she was younger, and the pair would discuss U.S. history at home.

However, at school, her teachers offered a different version of events.

“I remember teachers right away would say, ‘But you know, right now, let’s focus on what the book says. And the books says that there was a war, and the U.S. won the war,” Vivier said.

She would go back home and tell her uncle Frank and he would apologize for her teacher’s ignorance, saying that she didn’t know what she was talking about.

Now a teacher of language arts and religion at Our Lady of the Holy Rosary School, Sister Francina Vivier, 51, graduated with a degree in Chicana/o studies from CSUN back in 1987.