Politicize your mind: Who sunk whom on foreign policy at final presidential debate? 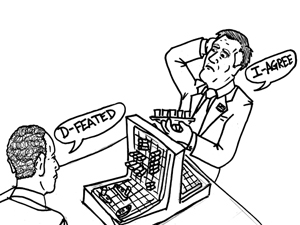 As the election winds up we were all treated to a resounding and hearty debate on foreign policy. Except of course for the more than 15 minutes that Mitt Romney and Barack Obama devolved into tired talking points on domestic policy. The almost complete lack of moderating skills by Bob Schieffer was sad, but at this point, can we really expect anything other than a floundering fish gasping for air?

When the foreign policy agenda was on point though, Romney displayed a level of discomfort and inexperience that can only be the result of a complete lack of comfort in the realm of foreign affairs. When you consider his completely bungled foreign tour this past summer it makes complete sense.

Romney’s entire tour was marred by missteps and flubs. He belittled the London Olympic Games and was roundly bopped on the head by Britain’s conservative Prime Minister David Cameron. He neglected the plight of the Palestinians in a bid to curry favor with Israel. And his general intent for the trip seemed to be steeped in fundraising and glad-handing which Obama pointed out in the debate.

Romney’s early responses were also grounded in the absurd idea that his multitude of changing positions weren’t up for discussion. Unfortunately for him, he has no solid idea of what he actually believes in. He’s never maintained any belief, but his belief in the need to win the presidency that he thinks he deserves. Playing the victim card is their go to defense and it smells strongly of cowardice and bullshit.

Romney is so adept at changing positions that he often does it within the span of a few moments. In his early remarks, he mentioned that though the killing of Osama bin Laden and key leaders in Al Qaeda were great steps forward in the war on terror, we cannot kill our way out of this mess. Moments later Romney explicitly stated that his strategy for handling Islamic extremists is exactly that.

“Well, my strategy is pretty straightforward, which is to go after the bad guys, to make sure we do our very best to interrupt them, to – to kill them, to take them out of the picture.” said Romney. It’s beyond belief that he is so disconnected from himself.

Obama’s biggest point was summed up fairly nicely in his response to Romney’s comments on Syria.

“What you just heard Gov. Romney say is he doesn’t have different ideas. And that’s because we’re doing exactly what we should be doing to try to promote a moderate Syrian leadership,” said Obama.

Romney has no ideas and no solutions except for the idea that he should be president. He never articulates his stances well and when he tries he ends up falling all over his previous positions on the issues at hand.

Even more apparent after this final debate is the fact that Romney pretty much agrees with most of Obama’s foreign policy actions but he thinks he should be the one implementing them instead of the president. Wrapping one’s head around that logic is painful and really establishes who deserves to be president and lead our country for the next four years.

– Nathan, like Mitt Romney, likes bayonets and horses in his warfare. They make it more fun. That’s one strike against you Obama.

Obama’s ship has been sinking for past four years

President Barack Obama wants to act as though he has maintained a strong foreign policy in the past four years rather than admit to the horrifying perpetual train wreck it actually has been.

“The world needs a strong America, and it is stronger now than when I came into office,” said Obama at the debate – between his snarky comments about bayonets and horses and his rather creepy death glare that would have made a child cry.

But are we really stronger today? Mitt Romney correctly pointed out that the size of our Navy is too low. It is certainly fair to suggest that advances in technology means that smaller fleets can do the same job, but that ignores the fact that adequate power projection requires enough ships to cover all corners of the globe. A smaller navy simply cannot be in as many places at once.

Having such a small navy means that losing a single ship is far more costly than with a larger navy. It is the same rationale that supports having more nuclear warheads than necessary to do the job, since there is no guarantee that all the missiles will strike their targets before exploding. Incidentally, the president has worked to reduce those as well.

Obama also claimed in the debate that our alliances were also stronger than ever, but that is not true.

Consider for a moment the treatment of our allies. For years, Poland stuck its neck out against an increasingly belligerent Russia, in order to install a missile defense system that would have protected Europe against a potential intercontinental missile attack. Obama canceled that program to the dismay of the Polish government. Years of building trust with Poland were flushed down the toilet by that decision and the odds of gaining Poland’s cooperation again are low.

A few years later, Obama was caught on microphone telling the Russian president that he would “flexible” when it came to the missile shield after the election.

According to the UK newspaper, the Telegraph, Obama gave away the serial numbers of Britain’s trident missiles against their protest while negotiating with the Russians on a pointless nuclear reduction treaty. It is remarkable that an American president would use another nation’s security as a bargaining chip when dealing with a political enemy like Russia, but it is even more remarkable that a president would do this to what is supposed to be our closest ally in the world.

The president also wants to pretend that he has been a friend to Israel, but what kind of a friend is he when he demands that Israel negotiates with Palestine on the impossible-to-defend 1967 border? Is there anyone who honestly believes that the president is in a good relationship with our best ally in the Middle East?

The president also mishandled negotiations that would have kept a small number of forces in Iraq in order to keep the fledgling democracy stable. Now the situation in Iraq is deteriorating again, as reported by the Washington Post earlier this month. Many Democrats hitched their political futures on a failure in Iraq, but when that didn’t happen, it appears they manufactured that failure. Now nearly a decade’s worth of fighting, thousands of deaths and billions of dollars are at risk of having been spent entirely for nothing.

Romney didn’t manage to put up a strong foreign policy argument and it wasn’t particularly surprising. Romney’s strength is and continues to be on the domestic end. He spent a majority of the debate agreeing with the president, rarely interrupting and remaining mostly passive.

It may be true that Obama won the debate in the end since he was much more aggressive than before. The last presidential debate may have been a lost battle for the Republican candidate, but the war isn’t over until election day.

– Arman is a concerned warhawk whose current hobby is building his own military to aid in his quest for total galactic domination. All shall bow before his might, or else he’ll be very sad.