Activist shared advice on how to DREAM 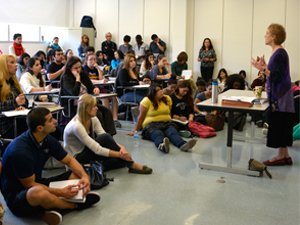 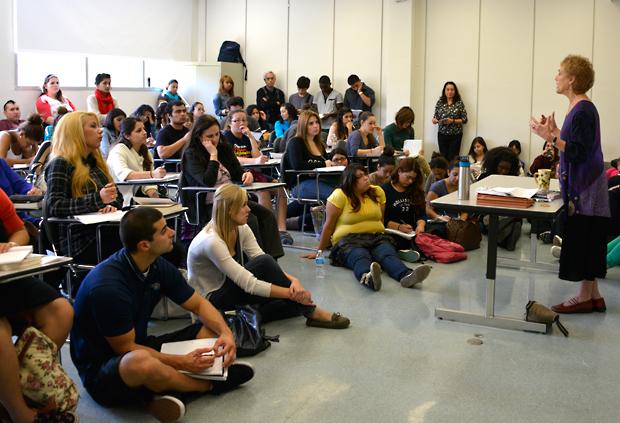 Ellen Bravo, a long-time women’s activist spoke to a full classroom in Jerome Richfield Tuesday about women’s issues in this election. “Women have to be strong and speak up for themselves against people who want to silence them, like Malala Yousafzai,” Bravo said of the Pakistani girl shot over activism in Swat Valley. Photo credit: Carla Adelmann / Daily Sundial

Fighting against the injustices that are affecting people and making sure students know what is at stake during this year’s election was Ellen Bravo’s point during her presentation Tuesday.

“Best way to get what you need for yourself is to work with others,” said Bravo, activist for working women and author of “Taking on the Big Boys.” “Stick together and work for change to make a difference.”

Bravo is the director of Family Values at Work Consortium, which helps the movement to change the workplace policies to help the needs of families.

Bravo works with women and families to get them what they want, said Marta Lopez, professor in gender women studies.

Lopez said Bravo shed light on some things that students may not know about because the media does not talk about them, like women who have lost their jobs for leaving to take care of a sick family member or women who are getting paid less than men.

“Many of the things she talked about (is what) women and men are doing across the country,” Lopez said.

These men and women are trying to create an environment where people can work and take care of their families, said Lopez.

“These women are getting at the heart of gender injustices,” said Bravo. “They are exposing the way the system works.”

“There is a lot more we can do than what a normal person knows,” Tran said.

Bravo also talked about the domestic workers who have not been protected by labor laws. She said that even if a person is undocumented it is still illegal to harass them and not pay minimum wage.

“People have rights even if they are not documented,” she said.

Bravo gave this advice to students who want to take on the big boys: DREAM.

DREAM stands for: Dare to imagine the world you deserve, Reach out and find people, Educate yourself and others, Act either by educating or signing your name on a petition and Multiply to become powerful.

“They are not more powerful but they try to push you down,” Martin said.