The Talk: Student discusses her points of view on virginity and sexual choices 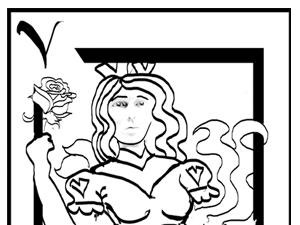 VIRGINITY IS A CONSTRUCT

From a very early age, girls are taught that it is in their best interest to remain virgins for as long as possible.  It can be as innocent as, “wait until you find the right person,” or as eyebrow raising as “wait until you’re married so you can have something to give your husband” as if love and devotion isn’t enough. But, no matter how it’s phrased, the message is loud and clear; don’t have sex.
Of course, this is almost always referring to abstaining from heterosexual vaginal sex. This concept turns a blind eye to oral and anal sex, and completely disregards women who have sex with women, as if these activities don’t even happen.

However, once these same girls are in high school, they’re being bombarded with various representations of sexuality: their peers are having sex, the characters of their favorite TV shows are having sex, and the media is equating sexuality with femininity. This message that “Sex is awesome!” is rather clear as well. Naturally, with all of the mixed messages, these girls are going to do what they want, and for some, that means having sex.

When I used to be able to tell people I was a virgin, I received everything but a standing ovation. Guys, whom I had no intention on sleeping with, would get excited, as if I told them that they’d won the lottery. Girls would tell me how much of a good girl I was, one even went so far as if to say she was “proud” of me, and for what? My virginal status didn’t make me a better person. I wasn’t any less rude, awkward, smart or caring.

Being a virgin didn’t make me a special person; it just meant that I had yet to have sex. But, people treated me as if I was a unicorn in some mystical forest.

Dr. Sheena Malhotra, professor and chair of CSUN’s gender and women’s Studies Department said that women receive a double message – one that encourages women to stay chaste while telling them that their value is solely as a sexual object. The promotion of both aspects is somehow always related to what men want, and tend to ignore the wants of women.

“In general, men are taught that virgins are what you marry, but expect women to be sexually experienced as well,” said Malhotra.

How can anyone expect someone to be well-versed in a subject she was never introduced to? By the time a guy is out of high school, it is generally expected that he has already lost his virginity to a girl. But if girls are expected not to have sex, how exactly can anyone expect boys to be having sex with them?

It’s not just the guys who aren’t making sense, either – women also aid in upholding this sexual hierarchy that offers no benefit to them.

A great example of this is the special attention the media gave to 30-year-old Lori “Lolo” Jones – a U.S. olympic hurdler who competed in 2008 and 2012 – for “coming out” as a virgin. Jones was asked if she’d seen any “hookups” in the Olympic Village, and her response was incredibly problematic.

“I’m in a suite with seven girls, and I guess we don’t have any sluts on the team,” Jones told USA Today.

Now while there’s nothing wrong with remaining a virgin for as long as she has, it is not right to imply that women who have sex are sluts. What justification could there be in telling the world whether or not the women Olympians were having sex? As if they hadn’t spent the last year in a hardcore training schedule and didn’t have the right to “de-stress” in any manner they saw fit.

Lolo is helping to further the mindset that insists a woman will be less desirable to men once she “loses” her virginity. This is damaging to women’s sexual identities.

“While sexuality is a powerful part of being human, reducing them to just that aspect makes them lose sight of who they are, and their full selves,” said Malhotra.

Being a virgin doesn’t automatically make anyone some ethereal being that is a prize to be won, just as having sex doesn’t instantly make someone a whore who is two steps away from turning tricks in a sleazy motel.

– Brandi Murphy is a third year Journalism student. She spends her free time sleeping, watching crime dramas and reality TV, and baking various desserts from recipes she found on Tumblr.

Editors note, March 12, 2019:  A contributor’s part of the article was removed.  The headline was also changed to accompany the change.