Reporting from the ring 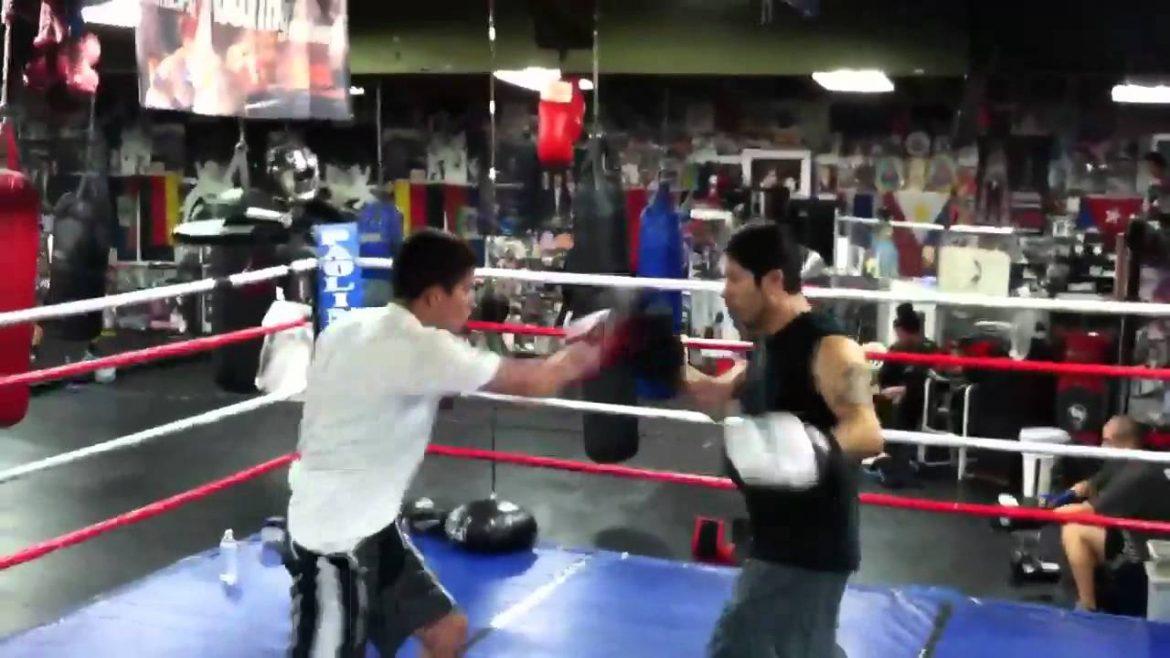 I had no clue what to expect as I walked through the doors of the New York City Boxing Club to train and spar with boxers.

The fighters at the gym, who were blasting music and doing various exercises, ranged from professional grade to amateur. Many were jump roping, some were beating on a punching bag, and others were sparring in the ring.

I stood at the entrance, processing what I was about to get myself into. I had done martial arts for nine years and reminded myself that if I could handle doing that, then I could successfully train like a boxer.

I’m a 22-year-old woman, and while I exercise regularly throughout the week, I was about to do the same rigorous training routine that boxers do on a daily basis.

The coach, Frank Silva, a boxer for 21 years and a trainer for 12 years, has trained Vinc Pichel, Jared Papazian and Joseph Henle to name a few. He approached me and said I’d be jump roping first. He led me to the mat where other fighters were already doing it. I was very nervous to jump rope around individuals who were doing it so gracefully, but they each encouraged me to practice at my own pace. I eventually jumped for about six minutes, which definitely got me warmed up.

I wasn’t prepared for the next part which was getting my hands wrapped. The wraps felt odd since I’m not used to having anything on my hands. Silva then put boxing gloves on me and I felt like a real boxer. It was an amazing feeling, but the gloves felt as if I had weights on my hands.

The next thing Silva had me do was punching combinations on a punching bag. This is where I finally lost my nerves and became excited. I felt extremely comfortable hitting the bag because punching was one of my favorite things to do in martial arts.

Silva coached me on how to properly jab and throw different punches, such as a hook and uppercut punches. I let out my anger in a healthy way as I practiced on the punching bag. Once I finished I was more than ready and couldn’t wait to get my chance in the ring against a fully trained boxer — but I still had more practice to do.

Silva instructed me on how to correctly punch on the double-end bag, a bag attached to the ceiling and the floor that bounces back and forth imitating a moving target. This was one piece of equipment that I wasn’t fully comfortable with. When I punched this bag it moved around a lot more than the other punching bag, but after a minute I felt more at ease.

I continued to practice my punching and the weight of the gloves finally started to effect my arms since it felt as if I were lifting weights. It was hard to continue to punch, but I’m a fighter at heart and refused to give up.

After I finished practicing on the double-end bag, Silva had me practice my punching and blocking. I hit the focus mitts that Silva had on his hands as opposed to the punching bag. I was beginning to feel tired, but I pushed through it and continued to punch as hard as I could.

The last thing I had to do to finish training like a boxer was step into the ring. I wasn’t nervous, — on the contrary, I was ready. I felt very strong and happy to be stepping between the ropes.

My opponent was Roger Carmona, a 16-year-old amateur boxer with a record of three wins and one loss. Carmona fights between the weights of 120 to 129.

My brother, Tarik Khoury, a 160 pound full time amateur boxer and part time amateur mixed martial artist with four wins and one loss, put my head gear on and rubbed Vaseline all over my face so the opponent’s punches would slide off to avoid busting up my face.

When the bell rang, Carmona and I touched gloves as a sign of respect. He reminded me of the tasmanian devil with his quick strikes and his ability to bounce around the ring. Everything around me became silent as I focused all of my energy onto Carmona.

I threw different punching combinations his way that connected and my confidence grew as the seconds ticked away. He hit me many times, but I couldn’t feel the strikes — It was like adrenaline had taken over my entire body. The sound of the buzzer signaled our one-minute break.

At this point (the last 3 minutes), I was dead tired. It felt as if I had worked out every muscle I have, but my adrenaline and my determination kept me going. When the final buzzer rang we touched gloves again.

“It was a little weird because I never hit girls,” Carmona said. “This was the second time I got in with a girl and it was fun, but weird at the same time because I can’t hit them so I have to control myself a bit more.”

I’ve never felt more confident in myself than when I stepped out of the ring. It was as if I accomplished something great, and I feel like I absolutely did. I successfully trained like a boxer.

I was intimidated in the beginning because I was in the same gym as experienced boxers. The fact that I am a woman going into a gym that’s full of men never crossed my mind. I didn’t feel that the men looked at me differently because I’m a woman. All of the fighters and the coach made me feel very confident and motivated. I felt comfortable in my own skin as I stepped into the ring and I knew that I could stand my ground against a fully-trained boxer.

“I think you did good for your first day,” Silva said. “Some people come in scared, but you were just nervous. I think at the bag you felt the most comfortable.”