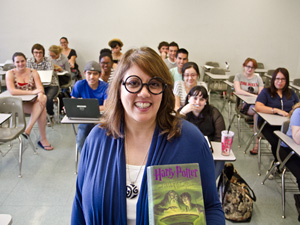 It’s not everyday a guest lecturer is 10 years old.

Some courses at CSUN offer an unusual experience.

Classes like Harry Potter (ENGL 495HP), popular culture (ENGL 313), the supernatural (ANTH 424) and the politics of hip-hop (PAS 368) may not seem like university appropriate coursework, but beneath the surface of these unique topics, professors are using their passions to transform the traditional college world.

Critical thinking with Harry Potter
The English department offers “Harry Potter,” which is a capstone course for English majors and select graduate students. This semester is the second time this course has been offered, and each time there is a 40-student waiting list for the course in which only 20 students can enroll, according to Dr. Ranita Chatterjee.

“Seniors need a class where they can bring all of their theoretical tools to analyze literature, like how to think critically, how to write essays, and how to do oral presentations, so it doesn’t really matter what you get them to read,” Chatterjee said. “I just thought it would be fun to do ‘Harry Potter’ because, you know, everyone likes to read them.”

Chatterjee has read the series five times all the way through, but she has read individual books in the collection anywhere from six to seven times.

This discussion-based, interactive course uses theories like feminism, Marxism and psychoanalysis to examine aspects of the books.

“The students have the opportunity to figure out how these novels work in terms of the commercial marketplace,” Chatterjee said. “Why the popularity?”

Because these books appeal to children and adults, Chatterjee is trying something new this semester. Her 10-year-old daughter and friends, who have read the series, will come into the classroom to discuss the books with college-aged students. This exercise is partially designed to remind college students how they felt during their first read-through of “Harry Potter.”

“At least the college students can remember what it is 10-year-olds find so fascinating and exciting versus what they are doing. After awhile, you lose the magic from analyzing so much,” Chatterjee said.

“Last week, we read the comic book ‘The Dark Knight Returns,’ and some of the students were actually complaining about how hard it was to read. It’s not easily consumable popular culture by any means,” Cullen said.

His classes include both a lecture period and a discussion period in which an easily disagreeable question is posed to the students.

The course is an important topic for the educational sphere because pop culture is the primary way that people explain their political attachments and articulate their place in society, Cullen said.

“That moment where students appreciate even something that they thought was simple before they got to the class, that there is a more complex structural level or that there are meanings being communicated to them that are almost subconscious, that is exciting to me. When I leave class, I am usually very sweaty because I like to have fun with it,” he said.

Getting students to think critically about what they consume is a key aspect of Cullen’s course.

“We were talking about ‘The Dark Knight,’ and someone said, ‘It’s just entertainment,’” Curran said. “Well, what is entertaining about watching someone beat the crap out of another person? In real life, you would immediately tell them to stop. I know it’s not real, but why would you want to see it? By being able to analyze this on a deeper level, you get more enjoyment out of it in the end.”

Supernatural
Another popular campus course is the anthropological look into the supernatural. Dr. Sabina Magliocco has been teaching courses on the supernatural nearly every other year since 1987 when the “satanic panic” was sweeping the nation.

“I’m a folklorist so I’m always interested in weird stuff, but I was very interested in some of the ways that legendary material was manifesting in everyday life,” Magliocco said.

The course has evolved over time because issues change and become history. Currently, Magliocco’s favorite topics to teach are neopaganism and issues from the book “Mama Lola: A Vodou Priestess in Brooklyn,” a case study of a contemporary voodoo priestess who practices in a Haitian migrant community in New York.

The class is usually in high demand because students are really interested in the course topics, Magliocco said.

“If students do the readings, and if they are willing to put in the work, they get a lot out of it. If you are expecting a show like what you see on television, it’s not going to work for you,” she said.

Hip-hop
Dr. Anthony Ratcliff and friends started a radio show that played underground hip-hop and interviewed activists that were using music as a teaching tool back in his Massachusetts graduate school days.

Today, Ratcliff is one of those activist teachers, blending the history of hip-hop music with contemporary issues and politics.

“Students have to understand the history behind it to recognize where it is now,” Ratcliff said.

Though history is an important aspect of the course, he understands the necessity of addressing where the industry is headed due to technological advances.

“I’m trying to get them (students) to understand and use technology to recognize that it allows us to have the history of hip-hop at our fingertips,” Ratcliff said.

This semester, Ratcliff is using Twitter for classroom conversation. He encourages students to tweet questions or comments during lectures and presentations with the hashtag #globalmoves2.0. He also allows students to blog about their projects on WordPress.

“A group of students will work together and they will upload their assignments on there. It’s really just a way for them to connect to other people that are doing hip-hop studies,” he said.

Some students are disappointed in the reading and writing requirements for the course because they think hip-hop is all about partying and having fun, Ratcliff said. However, most students enjoy this course, and it usually fills up quickly.

“Culture, and I see hip-hop as a culture, is not just about commerce,” Ratcliff said. “It’s not just about what you can buy and sell. It’s also about creativity and taking young people who are in very bad situations and giving them opportunities and avenues out of that.”

Class offerings vary by semester and can be hard to find an open spot, so students should plan ahead before enrolling in any of these courses.