CSUN students learn about more than the myths of Islam 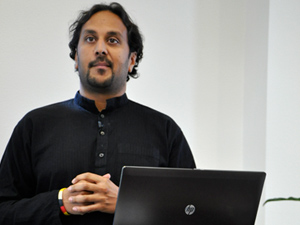 CSUN hosted a lecture “Islam: Beyond the myths to social change” in the Flintridge Room at the USU, featuring a speaker from the University of Michigan.

Amer Ahmed, associate director of multi-ethnic student affairs at University of Michigan, started the lecture by talking about basics of Islam.

“Everything you do matters in the afterlife,” Ahmed said. “It is an objective of our religion and we truly believe in that.”

The lecture was devoted to challenging the increased Islamophobia among Americans. After the 9/11 events, the entire Muslim community was treated like criminals and terrorists.

Kathryn Sorrells, professor of Communication studies and coordinator of the event said that it was a time to start breaking the stereotypes about people in color.

“There was an increase of negative statements and comments about Islamic and Muslim people,” Sorrells said. “We wanted to address the global issue and let students know more about Muslim culture and their religion.”

Ahmed talked about some myths that exist in American society about Muslims and what part of them is real. He talked about jihad in Islam religion, which is more commonly known as “holy war,” and in reality translates as a personal struggle to be better.

As for the women’s hijab, Ahmed said it represents the idea of modesty and came from the Jewish religion.

“It is one of our traditions to be modest in public,” Ahmed said. “We usually do not sexualize ourselves.”

Ahmed showed a video to depict what would happen if a person was put into a Muslim environment for 30 days so they could experience what it was like. Even after their time in a different society, that person still divided people into “us” (Americans) and “them” (Muslims).

“We are told that we’re not Americans all the time,” Ahmed said. “People hear that even if they were born in U.S.”

He tried to bring the idea that all people are the same, no matter what color of skin or religion they are and that it is wrong for people to be scared hearing words Muslims or Islam.

The purpose of the lecture was to educate students about Muslim origins and to push for a nonviolent social change among Americans.