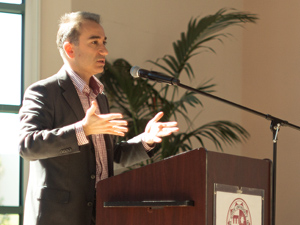 Mustafa Akyol shared his ideas of Islam’s strengths and challenges and solutions on how to deal with those challenges and move toward worldwide acceptance with CSUN students and faculty Monday.

Akyol, a Turkish political commentator and author, spoke about the importance of remaining peaceful and non-violent when demonstrating religious beliefs.

He gave a preview of his new book, “Islam Without Extremes: A Muslim Case of Liberty,” which was published last year. His writings have been in publications like the New York Times, Washington Post, Wall Street Journal and Newsweek.

His lecture focused on the negative effects of viewing cultures around the world through the lens of the media. He added this problem is due to the media’s heavy focus on the most shocking occurrences.

He used the example of Americans who relate all Muslims to violent behavior and how the Turkish media viewed Americans around the attacks on 9/11.

“In Turkey, we see the most shocking elements of the U.S. like headlines of Christians burning the Quran,” Akyol said. “But this burning was only one Christian leader in Florida.”

Akyol urged the audience to go beyond shocking media images and “go into the civilizations that are alien to us.”

Regarding the controversial video, “The Innocence of Muslims,” he referred to the attacks on the U.S. Ambassador in Benghazi as one of the violent acts of some Muslims.

“Even though we now know this attack was planned, the film was still used to justify the attacks,” Akyol said. “So what is the right response?”

Akyol used examples of how other countries reacted to the video, specifically Turkish people who peacefully roamed the streets with signs of writings from the Quran. He also mentioned the Muslims in England who peacefully passed out pamphlets of teachings of Islam as a reaction to the film.

“Nothing in the Quran says to attack the mockery of religion,” Akyol said. “It only says, ‘Do not sit with those people unless they engage in a different discourse,’ or do not talk to those people.”

During a question and answer session with the audience, one student said he felt peaceful demonstrations do not help how outsiders view him as a Muslim. The student asked Akyol how he could handle others’ views of him as violent when he would “never hurt anyone because of religion.”

“Yes, violence can be media savvy, but we need more meticulous and long-term efforts for Islam,” Akyol responded. “Civilized and peaceful ways are the best ways to present our religion.”

Michelle Martell, 18, came to the lecture with her Introduction to Religious Studies class and said she found Akyol’s presentation interesting and informative.

“I don’t know very much about other religions and opposition,” said Martell, a sophomore undecided in major. “The topic is something that is going on now and something we face day-to-day.”

Another student felt Akyol did a great job of educating the audience.

Yazmin Alalli, a freshman in accounting, felt the lecture served the purpose of educating those who may not know enough about Islam and Muslims.

“It was nice to have someone who can open people’s minds to show exactly what a Muslim is supposed to be rather than just how a lot of people act,” said Alalli, 24. “I think he was a good choice of who to choose to speak to talk about these situations.”