Jonathan Andrade
It’s midway through the NFL season and the perfect time to take a look at some of the scariest football players that roam the league today. Whether it be tears of joy from one player’s midseason greatness or the animal-like strength of another, these athletes have earned the recognition for their scary style of play. 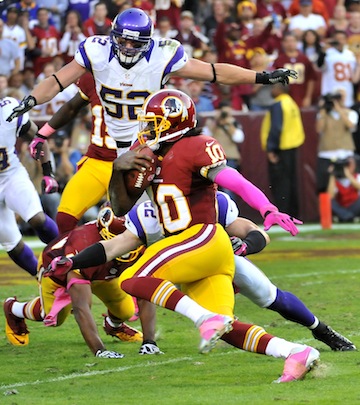 Monster games behind center have earned RG3 recognition from all the naysayers proving his worth in his rookie year.Straight out of Baylor, a speedy Griffin has powered his way to the tops of fantasy rankings, seemingly carrying the Redskins single-handedly.

Despite the ‘Skins 3-4 record, the 22-year-old has made a huge splash in the league playing like a man possessed (Get it? It’s Halloween). In his first career NFL start, Griffin threw for 320 yards and two touchdowns averaging 12.3 yards per completion en route to a 93.8 QB rating and an upset win over Drew Brees and the New Orleans Saints.

Since, the 6-foot-2 beast has thrown for over 200 yards in four of seven games and has only failed to find the endzone, be it by air or by foot, once in a 24-17 loss to the Atlanta Falcons in Week 5.

Despite being completely shut down by a feisty Steelers’ defense this past week, Griffin has a 97.3 QB rating and has completed 66.8 percent of his passes so far this year.He deserves to be recognized for playing freakishly well. Especially since he’s on the Redskins of all teams. Now that’s scary.

Scary Bad
Mark Sanchez
QB, New York JetsThe fans went wild before the Jets took the field to do battle with the Bills in their Sept. 9 home opener.

“J-E-T-S! Jets, Jets, Jets!” the crowds roared as they all screamed for their favorite quarterback.

Their favorite quarterback, Tim Tebow, was on the sideline while Mark Sanchez was under center throughout the 48-28 win in which Sanchez threw for three touchdowns and 266 yards.

Since, Sanchez has only lead the Jets to two victories in seven attempts and has only completed more than 50 percent of his passes in three of those match ups.

In the losses, Sanchez has managed to further encourage fans to cry for “Tebow Ti

me” due in large part to his 52.9 completion percentage, good enough for dead last in the NFL. 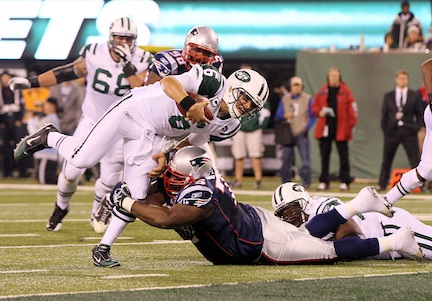 Sanchez only completed 44.8 percent of his passes en route to a 2.8 QB rating (no I didn’t miss a digit) against a stacked Niners defense so we’ll forgive him for that one.But there is no excuse for his latest outing at home against the Miami Dolphins.The four-year veteran managed to throw for nearly 300 yards but found the end zone and a Dolphin defender once and earned himself a 12.1 QB rating, his third lowest of the year, against the 27th-ranked passing defense in the league.

When fans are asking for Tebow to come in at quarterback to upstart a passing game, there is a serious problem. 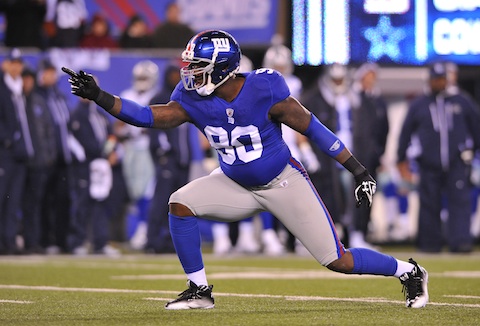 Usually when people speak of beasts in South Florida, the Bulls of the University of South Florida might be one of the first things to come to mind.

When it comes to the NFL, the beast in mind simply attended USF and now terrorizes opposing offenses on the gridiron.

Pierre-Paul is 6-foot-5, 278 lbs of pure rush-stopping, pass-rushing nightmares. With his 81-inch wingspan, Pierre-Paul has what it takes to not only push lineman around in the trenches but can drop back and hang with some of the quicker offensive weapons out there.

Last season Pierre-Paul had 16.5 sacks and through eight weeks this season he has 5.5 sacks 30 tackles (19 solo), a forced fumble and an interception for a Giants’ defense that held a Niners’ attack to a mere field goal in Week 6.

In the NFL combine prior to Pierre-Paul’s rookie year, he ran a 4.67 in the 40-yard dash and put up 225 lbs 19 times. Despite those impressive numbers, teams weren’t raving about his one year of major football experience but were more focused on his physical ability.

Pierre-Paul gained some viral fame with his video of his back handspring abilities and a segment on ESPN’s Sport Science attempting to explain his strength.

With a skill set like Pierre-Paul’s and his ever-growing knowledge of the game, teams will have to deal with this defensive demon for years to come.