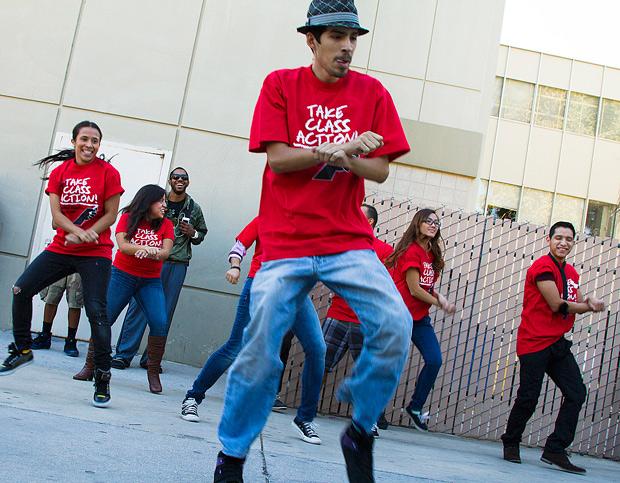 Supporters of CFA perform the Gangnam style dance at the flash mob at Bayramian Hall lawn. The event was to promote proposition 30 and oppose 32. Photo credit: Karla Henry / Contributor

The California Faculty Association (CFA) and California Federation of Teachers (CFT) held a Flashmob Rally Tuesday to inform students about Propositions 30 and 32.

Tables covered with pamphlets and information regarding Proposition 30 were positioned in front of the grass between Bayramian and Jerome Richfield. Students meandered through the tables collecting information advocating Proposition 30 and signing up to volunteer for phone banking with the CFT.

Kogi BBQ taco truck catered the event and a long line formed beside the truck as students waited for free tacos.

“The purpose of the rally was to inform the student body and faculty about the importance of voting in general,” said Theresa Montano, CFA member and coordinator of the event. “But in particular voting yes on 30 and no on 32.”

The rally featured a selection of both student and faculty speakers who discussed why Proposition 30 is important to them and the positive effect it will have on the public education system if passed.

CFT President Joshua Pechthalt spoke with passion about the injustice of the public education system in California and provided insight and perspective concerning the proposition.

“(Prop 30) will raise anywhere from $6 billion to $9 billion in the first year, and then raise about $6 billion every year after that for six years,” said Pechthalt. “(It will) do it by asking the wealthiest Californians to pay their fair share, by asking people at the top 1 percent to pay a little bit more for all of our students.”

Marissa Pina, a member of the Student California Teachers Association (SCTA), discussed how Proposition 30 will benefit her as an undocumented AB 540 student. Pina is a senior psychology and Latin-American studies major at Fullerton University.

“This is super important to us because we can’t go to the polls ourselves, we can’t vote, and we don’t qualify for FAFSA,” said Pina. “We are all struggling with the same thing and we deserve to have a good education.”
Ellie Bone, senior interior design major, liked that there were both student and faculty speakers to clarify how the proposition would affect people.

“If I don’t fight for my own tuition no one else is going to do it for me,” said Bone. “I know I’m not going to want to be paying a lot of money.”

Halfway through the rally 12 to 15 flashmob dancers galloped their way through the middle of the crowd and danced to new pop single “Gangnam Style” by Psy.

“I think it was a good outcome,” said Montano. “I think the ultimate outcome will be on voting day when we see the defeat of 32 and the victory of 30.”