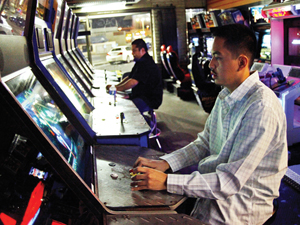 But Daniel Villa, 22, does not think the arcade’s name has lost any meaning. He has been a regular at Family Fun Arcade since 2008 and says it is where he met some of his closest friends.

“Like the name says, everyone here became a family,” Villa said. “This place has been like a reality show for me.”

Villa explains that all of the good and bad things that have happened to him in his social life have revolved around Family Fun Arcade. From stupid arguments over games, to fighting over the “one girl” that comes the arcade, to hanging out in the parking lot in front of the arcade after closing.

“The neighbors hate us,” Villa said. “That’s why they’re making him close it.”

The “him” Villa is referring to is Ralph Senhert, owner of Family Fun Arcade. Villa says the surrounding businesses do not like the arcade because it is too loud and open too late.

“They’re trying to raise his lease 30 percent and want him to close at 10 p.m. every night,” Villa said.

“In 2008 Street Fighter IV came out and this was the first place in the United States that got the game,”  said Ray Ruballos, a professional gamer who goes by the name Knives. “It could be one in the morning and there would be a line of people waiting to play.”

The official reason Senhert gives for closing is “health and financial considerations” according to the arcade’s website. Lee says that Senhert has done all he can to keep Family Fun Arcade open and has “neglected other things for (the) arcade.”

“I never see him rest,” Lee said of Senhert. “After surgery he went straight back to work and was working so hard that his stitches busted.”

Those surgeries have compiled for Senhert and so have the bills, which is why he’s closing the Family Fun Arcade, which has not been as profitable recently, Lee said.

The rise in online gaming has given gamers a different venue to compete with each other and they don’t even have to leave their couches. This convenience takes away from the social aspects of gaming that the arcades bring to gamers, Villa said.

Villa says that Super Arcade will now be the closest “real” arcade left standing. While Walnut is a bit of a trip for him, Villa is still going to head out there any chance he gets.

To help with Senhert’s rising medical bills, Family Fun Arcade is hosting a 24-hour stream-a-thon on Dec. 15. The benefit will stream live matches between some big names in the fighting game community. The stream will solicit donations from individuals as well as advertisers, according to arcaderelief.com.