Get clubbed over the head with a lot of comedy 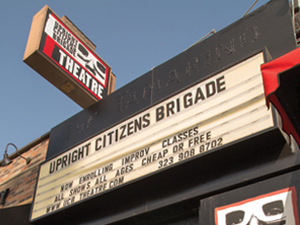 Within Los Angeles, there is a thriving comedy club scene. Many classic performers and funny people have made their comedic bones performing on the LA circuit and many clubs have laid the foundation for their careers. There’s alway a show to see and the variety of venues makes any show-catching scenario a fun endeavour.

This very small venue of 92 seats is the brainchild of the sketch group  Upright Citizens Brigade cast members, Matt Besser, Amy Poehler, Ian Roberts and Matt Walsh. The Los Angeles branch is the second venue, which opened in 2005, while their New York location is the founding branch. UCB is home to a large swath of comedy shows, including, stand-up, improv, podcasts, variety sketch, and everything in-between. The different programming makes for an outstanding, eclectic mix and often results in some zany shows. This also means the schedule is constantly changing and planning in advance is a must. The admission varies but most often it’s a miniscule $5 so the bang for your buck appeal is dynamic. My favorite is the weekly Tuesday night show, Comedy Bang Bang. There is no set schedule of who will show up to perform, but the many times I’ve gone, seeing an A-List comedian was not uncommon. Aziz Ansari, Russell Brand, and Zach Galifianakis, to name a few. Just be aware that once tickets go on sale, they sell out fast so reserving them online is key. Also, the club is BYOB so that adds a layer of funk to the whole affair. And finally while waiting in line for the show, you can look directly across the street at the Scientology Celebrity Center and see Tom Cruise’s silhouette in the topmost window. Creepy.

The Hollywood Improv
Where It’s At- 8162 Melrose Avenue, Hollywood, 90046
Admission- Varies, plus there is a two item minimum while seeing the show
Alcohol Served- Yes

The Hollywood Improv is a medium sized venue with quite a few locations across the country. It’s got a slicker vibe than some other clubs but like a lot of them, there’s often different types to enjoy. You’ll see a famous comedian, like Dane Cook, working on their new stand-up routine and getting feedback from the crowds. This makes for an interesting environment as seeing the crafting of jokes results in appreciating them that much more. Variety is the spice of a good club and The Improv has plenty of spice and laughs.

The Comedy Store is a staple source of entertainment in Hollywood. It’s been in existence at it’s current location since 1976 and it’s no exaggeration to say just about every major comic in existence today has performed on the stages there. From Robin Williams to Dave Chappelle, it seems a rite of passage to make people laugh on their stage. The club is run by the Shore family (yes that Pauly Shore) and embodies an element of raw comic energy. The decorum is dated and the feeling one gets when entering is quite electric as the walls are lined with pictures of veteran comedians. This place oozes character and the comedians you can see are often up and comers with a dash of veteran humor. Often, your server is a young talent who will get you drinks and then MC the show, so you know that it’s a tough business but this makes it seem more raw. I recommend at least going here once to see a true landmark and  you’ll probably laugh a lot too.