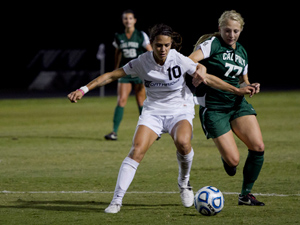 Both teams came out fighting hard on both sides of the ball, regularly trying to tie up the others offense with pressure.  Neither team was able to take control of the game, but senior forward Melissa Fernandez was able to break the stalemate taking the first shot on goal just five minutes into the game.

A hand ball by the Matadors gave the Mustangs their best shot at scoring in the first half with a free kick just beyond the box.  Senior goalkeeper Cynthia Jacobo stretched out to make the save knocking the ball into the crossbar and out of play. The bang-bang play continued when the ball skirted to another Mustang player who put a shot on goal, easily saved by Jacobo.

Plenty of chances to score were given to the Matadors throughout the half, with multiple missed shots and some amazing diving saves by Mustang freshman goalie Alyssa Giannetti.

“We were unlucky for the most part, balls sailed over to the wide, we had a lot of opportunities,” said Fernandez about the Matadors’ offensive attack.

Fernandez, the offensive catalyst over the last few weeks, was able to score the game’s first and only goal.

Redshirt sophomore midfielder Brittanie Sakajian dribbled the ball up the middle of the field and passed to Fernandez on her right.  Fernandez dribbled through multiple defenders and was able to curl a ball into the upper left corner past a diving Giannetti.

Responsible for another game winner, her third in the past two weeks, Fernandez leads the team with 19 points.

“I waited a long time for this, I’m a fourth year senior, so this is it for me,” said Fernandez about her recent success.

The Matadors came out firing in the second half, trying to put the game out of reach, but were never able too.  The Matadors’ offensive zeal seemed to fire up the Mustangs, and they exerted tremendous pressure on the Matadors’ defense.  Multiple Matador defenders helped Jacobo make a stand in goal against repeated attacks.

Untested most of the game, Jacobo made a diving save in the early part of the second half, diving and stretching out to her right, keeping the score at 1-0.

“We were letting up a little bit at the end, and we just need to keep fighting and keep staying strong til the end, because we knew that they would come out in the second half as fast and strong as possible to try and get this win,” said Jacobo.

A high stake game such as Thursday’s was bound to be a physical match, and from the start it was.  The Mustangs were hit with two yellow cards, including one when two defenders seemingly crushed senior defender Stephanie Norton at midfield.

A sense of euphoria and excitement swept over the Matadors’ players and coaches for a culmination of four years of work for most of the girls on the team.