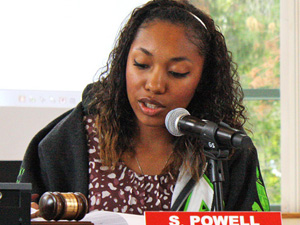 The Associated Students passed a resolution today opposing the CSU board of trustees contingency plan, which would be enacted regardless of the success or failure of Proposition 30.

The resolution is passed ahead of the next board meeting taking place on Nov.13, 14 at the Office of the Chancellor in Long Beach.

A.S. spent the majority of the meeting discussing the possibility of introducing an optional, two or three-day new student orientation retreat for incoming CSUN freshmen. According to A.S. General Manager David Crandall, many other campuses have either a mandatory or optional retreat for freshmen.

A.S. President Sydni Powell said she thought it was a good opportunity for students to get acclimated to college life.

“There’s a reason why theres so many programs for freshmen, because there’s data to support that when students get engaged on campus, either via a network or leadership experience, they are more likely to persist to a degree,” said Powell.

The senators discussed possible ways to fund such a retreat, which would cost about $40,000 per weekend trip or about $240 per student, according to Crandall. Senators suggested allocating money from the campus quality fee or fund the retreat thought A.S. funds, and either option would be supplemented by a student co-pay. Several senators suggested that the co-pay should be at least $120-$140 of the cost, citing that students would be more likely to engage at the retreat if they invest in the experience.

Senator Marquise Foster suggested possible scholarships for students who cannot afford the co-payment, since he himself had difficulties paying for college costs as a freshman.

A.S. also discussed allocating up to $1,000 towards free tickets for CSUN students who want to attend the men’s soccer Big West tournament semi-final game. During open forum, members of the men’s soccer team expressed their gratitude toward A.S. for supporting and funding their team.

In other news, A.S. approved funding for various student organizations, such as the Indian Student Association, Kappa Kappa Gamma and the Preconception Peer Educators. The largest allocation went to A.S. Recycling for America Recycles Day, at $4775.