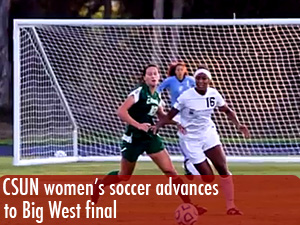 Both teams came out fighting hard on both sides of the ball, regularly trying to tie up the others offense with pressure.  Neither team was able to take control of the game, but senior forward Melissa Fernandez was able to break the stalemate taking the first shot on goal just five minutes into the game.

A hand ball by the Matadors gave the Mustangs their best shot at scoring in the first half with a free kick just beyond the box.  Senior goalkeeper Cynthia Jacobo stretched out to make the save knocking the ball into the crossbar and out of play. The bang-bang play continued when the ball skirted to another Mustang player who put a shot on goal, easily saved by Jacobo.