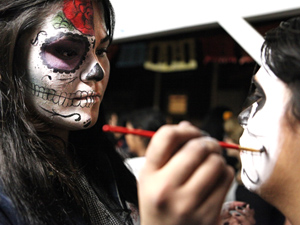 Community members and CSUN students came together for a chance to celebrate and learn about Dia de los Muertos Friday night.

Put on by CSUN students involved with M.E.Ch.A (Movimiento Estudiantil Chicano de Aztlan), everyone was invited to partake in and learn about the celebration of Dia de Los Muertos through traditional Mexican practices.

“It is an event that commemorates the dead, a close relative or family member that has passed,” said Grace Castaneda, the night’s emcee and senior political science major. “We ask for their spirits to come unite us this night and join us in this cultural festival.”

The evening started off with a blessing of the crowd and those that have come before, and soon after the event was in full swing.  Multiple rows of vendor tables, an arts and crafts area for kids, free face painting, performers, and beautiful art displays were just some of the things that guests could enjoy.

“The blessing brought us all together, because she brought silence to the crowd,” said Roxana Jimenez, a sophomore theatre major.  “She helped us all be aware of what’s going on, what the event’s about, the fact that they introduced it the introduction was very beautiful.

A walk through the Chicano/a house showed the altars that many families make within their houses to celebrate a deceased loved one.

“The altar consists of putting objects, food, or drinks that the person that passed away loved a lot and connects with,” said Sandra Sanchez, one of the event organizers and junior sociology major.  “In theory that’s what brings them back to join us this night and commemorate them.”

M.E.Ch.A. members also created a cemetery area that helped show what a real cemetery might look like in Mexico during the holidays. The use of bright colors and a happy feeling is unlike anything seen in America.

The face painting areas throughout the event were a major draw for multiple attendees, staying busy well into the night.  The crowd’s main energy was focused on the stage where musical performances and skits were performed by an array of performers.

“This is pretty representative of what goes on, all the altars, food, dances, and skulls, but the performances were the best part,” said Rosalba Martinez, a freshman liberal studies major.

CSUN’s own Ballet Folklorica performed folk dances, which kept in line with many of the performances throughout the night.  A mixture of outside performers and CSUN-based performers kept an even balance, and gave the community something to watch and share their stories with one another.

“It’s amazing, it brings us together in a social way to meet each other, meeting culture and music,” said Jimenez.

While the event was overflowing with local community members, many CSUN students made up the crowd, and their thoughts about the event were nothing but positive.

“I heard about it from my professor and came because of the extra credit,” said Melvin Hernandez, an undeclared freshman.  “I didn’t know what to expect, but it is big and well put together.”