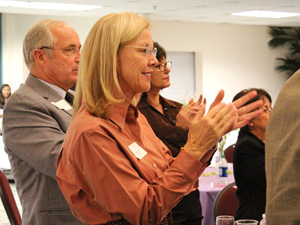 The 10th biennial Phenomenal Woman Reception and Awards Fundraiser celebrated women who have made local and worldwide contributions to women’s equality Saturday.

“I’m looking forward to meeting these phenomenal women and hearing their stories and to raise money for the department,” said President Dianne Harrison before the event.

The first honorary speaker, Williams, won the Nobel Peace Prize for her work as founding coordinator of the International Campaign to Ban Landmines (ICBL) in 1997.

“I believe each and every one of us has a responsibility to stand up and use the power we have to make the world better for everybody,” said Williams, who ditched her shoes before her barefoot speech. “You all have to make choices about how you want to leave behind the path of your life, and to me, the most important thing is, do no harm. If you can’t get up and accept responsibility and contribute, at least do no harm.”

“These women have done a lot, so it’s really exciting to be here and see that the GWS department does such a big event,” said Vike, 24.

Another speaker, Roxas, spoke of her health care work in the Philippines in 2009, a trip during which she was abducted at gunpoint and tortured for six days by the Philippine military. She is one survivor of three women; the two others are still missing.

“Every time it feels nervous to speak in front of a crowd or share my story, I think about not only these two women, but many other women who cannot be here to speak about what they’ve been through,” said Roxas, who was holding back tears. “My voice may be quivering, but my spirit is strong.”

Sheena Malhotra, chair of the gender and women’s studies department, oversaw the event and said the diversity of the speakers was amazing.

“The beauty of an event like this is that we have local activists who are doing amazing community work, performance artists and a Nobel Prize winner on the same stage,” said Malhotra. “It’s a fun way to bring together a variety of people and perspectives that we admire.”

The event included a silent auction with bidding items including a dinner with Elizabeth, the dean of humanities, at her home, San Diego Zoo passes, a signed David Letterman shirt and L.A. Dodgers tickets, an item on which President Harrison bid.

This event saw the largest number of items in its history, according to event coordinator Shira Brown. Brown is also director of CSUN’s Women’s Research and Resource Center (WRCC), the oldest continuing women’s center within the CSU system.

The money from the auction will go to the gender and women’s studies department (GWS), scholarships, faculty research and funding for the WRCC, according to Brown.

“We just celebrate women and all they contribute to our world,” said Brown, who has been with CSUN for seven years. “We’re also here to acknowledge the importance of gender and women’s studies, and the money raised is key for the department to function for the next few years until we have our next event.”