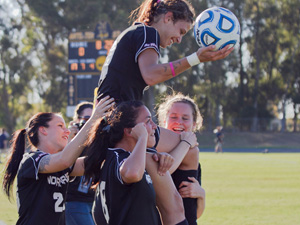 Every victory the Matadors earn from now until the end of the season comes with the distinction of being a first, and Sunday afternoon in Irvine, the Matadors added another first to that list with a golden goal that dropped Cal State Fullerton in overtime.

With this victory, Northridge earned its only Big West Conference Championship ever and a berth into the big dance — the NCAA tournament.

The game’s lone goal, just like last time these two teams faced off, came within the first two minutes of overtime. It was put in the back of the upper right corner of the net by senior forward Melissa Fernandez off an assist by fellow senior forward Amanda Smith.

Fernandez had seven shots on the night, four on goal, and recorded her eighth goal and fourth game winner of the season. Due to her offensive prowess over the last few weeks, Fernandez was named the MVP of the Big West Tournament.

“It’s such a team effort, but individually I’m very happy to win that award, I practiced finishing all summer long and wanted to bring that to the team,” Fernandez said.  “The team works hard for me and I decided to finish for them.”

Though they won, things didn’t look good for the Matadors coming out of the gates as their normal game plan of attacking and being aggressive was nowhere to be found. Instead, a complacent and maybe nervous team took the field, and the Titans tried to take advantage by putting up six shots within the first 13 minutes. The Titans outshot Northridge 12-3 in the first half.

“I think we were a little nervous and a little tentative from the beginning, I just told them to go for it, let’s not have any regrets,” said head coach Keith West.

CSUN once again proved its defense tops the Big West as Jacobo posted her 27th career shutout and fifth in a row.. This game also marked her 34th win in goal as she dived, stretched and jumped throughout the night, saving five shots in total. Jacobo has given up one goal over the last seven games and has tallied 25 saves during the same time period.

One particular save, which brought the audience to its feet, had Jacobo diving to her right to reach out and knock away one of Fullerton’s six shots on goal with the edge of her fingertips, preserving the team’s shutout.

Opening the second half with a more aggressive approach, the Matadors came out firing, but again were met by the stiff defense of the Titans.

“We brought more energy, we weren’t going to let our season slip away, I just told the team to let it all go and give it everything we got,” West said.

The entire game came down to one turning point: a penalty kick from 12 yards out taken by the Titans.  Northridge caught a break as the shot went just past the outstretched hands of Jacobo, bounced of the sidebar and rolled harmlessly out of bounds.

“This can’t be it for us, this can’t be how we end it, this isn’t going to be the last,” said Jacobo about the kick that slipped by her which could have put CSUN in a 0-1 hole. “Her not putting in the (penalty kick) was just a relief. It proves it was our championship.”

Using the momentum of a second half that had CSUN outshooting the Titans 8-5, a determined Matadors team didn’t even give Fullerton a chance in overtime as they advanced to the NCAA tournament.