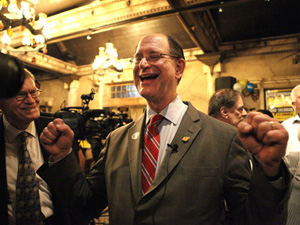 “I wish both of them the best of luck and the wisdom and strength to confront and overcome the challenges that face our nation,” said Berman. “I will do whatever I can to ensure a cooperative and orderly transition.”

With 100 percent of precincts reporting, Sherman received 60.5 percent of the vote.

Their similar voting records and stances on hot button issues such as immigration, education and healthcare set the stage for heated debates, personal attacks and, during an Oct. 11 debate at Pierce College, a physical confrontation.

“I didn’t go into politics to run against Howard Berman,” said Sherman Tuesday night. “It has been a humbling experience to seek the support of the San Fernando Valley.”

Among Berman’s crowd about 200 supporters, CSUN student Melissa Realegeno attended the rally at her first election.

“It’s very nice,” said Realegeno. “I like to see the energy of politics, who’s in it and who’s involved.”

She said she was concerned about the fate of the state propositions, especially Proposition 30 which she felt was directly related to the future of her education.

“I read the pros and cons and made sure I knew what I was voting for,” she said. “I think it’s very important for students to be politically active.”