Column: Obama and Romney battle to split decision after three rounds of debate 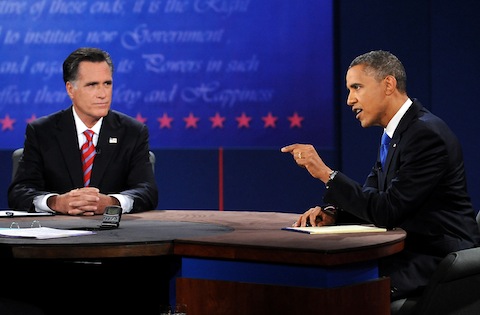 President Barack “The Commander” Obama successfully defended his title against former Gov. Mitt Romney with an electoral count of 303-206 as of midnight Tuesday.

The three-round championship bout between the two political heavyweights didn’t take as long as many expected despite the ever-important title of president of the United States on the line. Victories in swing states like Oh io and Florida were enough to give Obama the advantage and take reigns of the political world once again.

Romney came out swinging in the first round putting Obama on his back multiple times via a flurry of haymakers on topics ranging from tax cuts to health care. “The Rumbling Republican” continued looking for the early knockout, easily picking apart Obama’s defense.

“My view is that we ought to provide tax relief to people in the middle class,” Romney said.  “But I’m not going to reduce the share of taxes paid by high-income people. High-income people are doing just fine in this economy. They’ll do fine whether you’re president or I am.”

Obama tried to fend off Romneys combinations with some punches of his own, accusing Romney of attempting to turn Medicare into a voucher program. Romney countered by claiming Obama’s idea to cut $716 billion from Medicare was not realistic.

The judges and viewers equally agreed the effort by Romney in the opening round was more than enough to take Round 1 and put the champ against the ropes.

Obama’s corner didn’t want a repeat of the first round and made sure the president wouldn’t find himself in a 2-0 hole by attempting to gain the advantage on the topics of college graduates and women in the workplace. The champ came out and tackled the question posed by college student Jeremy Epstein on what each candidate would do to improve the labor market.

Obama not only stated that he wanted to create five million new jobs but he wanted them to be high-paying, high-skill jobs rather than outsourced jobs.

“There are some jobs that are not going to come back, because they are low wage, low skill jobs,” Obama said. “I want high wage, high skill jobs.”

Romney battled back with six jabs referring to the “23 million people struggling to find jobs,” despite the unemployment rate floating around 12 million, but simply couldn’t steal this round while Obama closed in on him.

Judges had it in Obama’s favor with the third decisive round to go.

The two warriors met for their final chance to impress judges and fans alike and delivered memorable blows while dancing around foreign policy.

Both Romney and Obama largely agreed on most issues but traded heated remarks, including Obama’s accusation that Romney wanted tax cuts that would favor the wealthy at the expense of the middle class. Obama taunted Romney’s apparent naivete on the subject of America’s armed forces and Navy after the righty called for more ships and a bolstered Air Force.

“You mentioned the Navy, for example, and that we have fewer ships than we did in 1916. Well, governor, we also have fewer horses and bayonets,” Obama said.

After three rounds, the judge’s took very little time to tally up their scorecards giving Obama the victory and the presidency title belt once again.