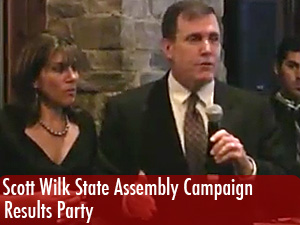 Romney headed into the election with a 1 percent lead, 49 percent to 48 percent, against Obama, according to the final Gallup poll on Monday.

A shocked Jeannie Atkins, 58, of Newhall said she was “disappointed in the people of America.”

“I think Romney had done fantastic in his campaign,” she said. “He was a businessman and former governor. He had the background to be our next president.”

Still, Atkins celebrated with more than 100 people the victory of Republican Scott Wilk, who won against Democrat Edward Headington by 61 percent for the 38th District Assembly seat. The district was represented by Republican Cameron Smyth until he reached his term limits this year.

“I’m going up there to represent you,” Wilk said during his victory speech at a post-election party in Valencia. “This is my pledge to you. First thing we’re going to do, because Proposition 30 is going to fail, we need to get rid of those trigger cuts.”