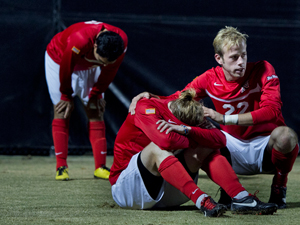 CSUN is headed to UC Davis for its first Big West Championship game after defeating Cal Poly 2-0 behind dominate play from junior forward Edwin Rivas in the semi-final Wednesday night at Matador Field.Rivas put pressure on the Mustang (11-7-1, 6-3-1) defense all day and his play resulted in the go-ahead goal in the 60th minute. Rivas held off three defenders before lofting the ball from the left side to a running Sagi Lev-Ari who volleyed it into the back of the net.

“Before the game, (Rivas) came up to me and said, ‘I got you coach.’ When he says that, he’s ready to compete,” said head coach Terry Davila.

Rivas led an efficient Matadors (14-6-0, 7-3-0) offense with five of their 21 shots on the night. He used his powerful left foot to force Cal Poly goalkeeper Wade Hamilton into acrobatic saves. If it were not for Hamilton, the Matadors would have won by more than two goals.

“I was a bit unlucky today, but I kept going at it. I wasn’t able to score so I got an assist,” Rivas said.

The Matadors put the game out of reach in the 85th minute when redshirt freshman forward Carlos Gonzales scored his first career goal to assure CSUN a spot in the Big West Final.

The goal was set up by Midfielder Carlos Benavides who juked out a few Mustangs before sending the ball to midfielder Chris Smith on the right. Smith then crossed it to Gonzales who bounced it past the keeper.

“I saw (Smith) and I tried to separate from the defender in the box. (Smith) crossed the ball down the line and I was able to get a shot,” Gonzales said.

Gonzales broke his foot in the summer and had to go through a lot of strenuous rehab to get out on the field this year, he said.

“We’re proud of him. He worked hard to get here and good things happen to those who work,” Davila said.

CSUN’s defense was just as impressive as its offense, as it recorded a shutout, keeping a hot Mustang team off the scoreboard.

“I commend our center backs,” Davila said. “Their center forward (Mackenzie) Pridham is a great player and he had 3 dangerous shots.”

The Mustangs had their fair share of chances, getting 11 shots off and forcing CSUN goalkeeper Michael Abalos into four saves.

Abalos had the loudest celebration when the final whistle blew. For seniors on the team like Abalos, it has been a long journey to the Big West Final. Abalos was the goalkeeper for the Matadors two years ago when the team won only three games in a rebuilding year.

“It’s easy to not love the game when you only win three games,” Abalos said. “I can’t wait for Davis. Can’t wait!”

Northridge will face UC Davis on Saturday in Davis for the Big West Championship and an automatic spot in the NCAA tournament. The team may be without its leading scorer Lev-Ari who injured his shoulder in the second half of Wednesday’s game.

“The game is going to be during the day and under the hot sun, but we’re going to leave it all on the field,” Rivas said.