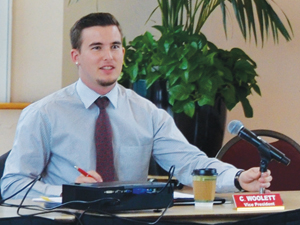 The Associated Students (A.S.) passed two resolutions to raise funds for Hurricane Sandy and launch “The Media and Public Health Act Campaign” at its meeting Friday.

The resolution to fundraise for Hurricane Sandy, authored by Sarah Garcia, senator for the College of Education, aims to raise $50,000 via a donation drive taking place Nov. 16, 19 and 20. A.S. will donate up to $36,000 to this cause and funds will go to an organization that will later be determined.

Marquise Foster-Johnson, senator for the College of Humanities, penned the health act campaign, which will collaborate with the National Eating Disorders Association to introduce and pass federal legislation that would require photoshopped images to be labeled as such.

The senate also addressed the passage of Proposition 30 in Tuesday’s election. Faculty adviser Tom Piernik said the measure prevents the cuts that would have resulted if it failed.

“It’s positive news for students overall,” he said. “It allows CSUN to retain student services that go beyond classroom instruction, retain the size of the student population and retain it in a normal sort of a way, so students aren’t clamoring for limited courses.”

Certain students will receive refunds because the proposition passed, but which students will receive how much money has yet to be determined. Additionally, refunds may not go directly to students. They may be used to clear students’ outstanding balances and other financial obligations first, Piernik said.

Vice President Christopher Woolett said that while Proposition 30 passed, it does not mean problems facing students have been solved.

“We should continue to look into possible solutions and possible changes to better help this university grow,” he said.