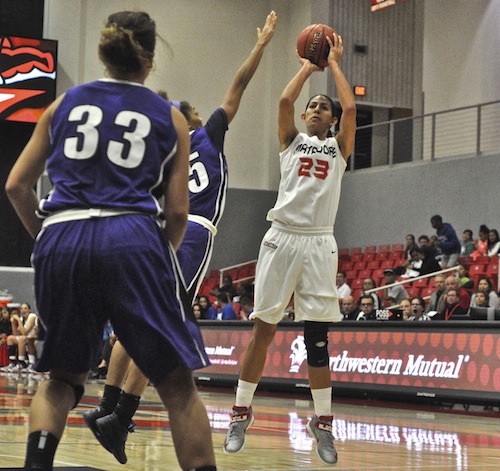 Despite missing their starting shooting guard, the Matadors mounted a furious second half comeback — one that had them go on a 35-9 run led by sophomore guard Ashlee Guay’s game-high 20 points — to win their season opener 70-51 against Portland Friday night at the Matadome.

CSUN trailed 33-29 while shooting just 37 percent heading in the locker room, but good outside shooting, a new-found appreciation for defense in the second half and a spark off the bench aided the Matadors rout of the Pilots.

“We didn’t do what we were supposed to do defensively in the first half,” said head coach Jason Flowers. “We did better in the second half. The effort was there and everybody was working together on the floor to get stops.”

Northridge forced 26 turnovers throughout the game and had a combined 16 steals and blocks.

According to Flowers, that kind of defensive energy is what triggered a 42 point second half out of the Matadors — one that saw sophomore guard Hayley White come in as a reserve and finish with a career-high 10 assists.

Flowers had nothing but praise for the guard as she filled up the box score with eight points, seven rebounds and three steals to go along with her double-digit dimes.

“She’s huge for our team and she was huge tonight,” Flowers said. “She’s like a swiss-army knife, she’s played every position for us and she can do everything.”

“If we had a weakness from last year, I’d say it was our shooting from the perimeter,” Flowers said. “(We’ve) put in the work, the time and the effort and it showed this game.”

Guay, who finished the game with six assists and three steals, found her shooting stroke as she went 9 of 16 from the floor and picked up the scoring void created by sophomore guard Janae Sharpe’s absence, who averaged 11.4 points per game last season and missed today’s game due to injury.

“We’re trying to become a shooting team because we’re all shooters,” Guay said. “When we started pushing the ball and playing our game, the shots started falling for us.”

Adding to the mix were Alama, who had a team-high eight rebounds to go along with her eight points, and sophomore guard Randi Friess, who buckled down defensively and accumulated three steals and two blocks. She also chipped in a 3-pointer.

Flowers, who just entered his third year as head coach, hopes to improve upon a season where the team saw one of the biggest turnarounds in its history. According to him, the only way to do so is by playing hard-nosed defense.

“We just have to keep playing together as a team, we have to get everybody on the same and focus our energy on the defensive end,” Flowers said. “It always come right back to how we play defense.”