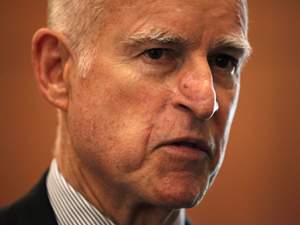 “After the testimony of a number of folks, including students, and the outcome of the election of Proposition 30 I thought it was in the best interest of the body to remove that from the agenda today to study it further,” he said.

Gov. Jerry Brown attended the morning session of the CSU and congratulated the crowd on the passage of Proposition 30. However, he remarked that the road ahead may be challenging.

“We have a vote of confidence,” he said. “Let’s measure up to the expectation of the voters. (The) taxpayers got out of their comfort zone, we have to follow suit.”

The three fees that were to be considered included the “third tier” fee, which would charge an extra $200 per unit over a 16-unit semester course load, a “graduation incentive” fee, which would add $372 per unit beyond 150 in a student’s college career, and a “course repeat” fee that would tag on $100 per unit for repeated courses.

In an interview after the morning session concluded, Brown said he will be asking the public to make sacrifices to reinvest in education, however he would not comment on what students can expect.

“We need to share the burden, but according to the ability different people have,” he said. “Those with the biggest belts have to tuck them in first.”

He refused to share his view of the proposed fees and said he still needs to “take a look at it.”

Students for Quality Education held a rally outside of the chancellor’s office in the afternoon. Protesters held signs and led chants against raised tuition and the high cost of education.

Miguel Garcia, a student organizer from SQE at CSU San Bernardino, said the news was good but there is more work to do.

“It’s a good thing that it’s stopped for now but we’re still going,” he said. “Hopefully (the board) will get rid of it altogether and come back with real solutions.”

He was also surprised that the governor made an appearance, as it is rare.

“For him to come out is pretty cool,” he said. “If he’s coming I guess it means we did something right.”

Other highlights from the meeting

A report on proposed Title V amendments was also presented to the board. These would eliminate certain unit requirements in an effort to reduce the amount of credits needed for students to complete their bachelor’s degrees.

The “minimum” of units-per-degree was decreased from 124 to 120 in the 2000-2001 year. However, in an effort to encourage graduation, a new “maximum” would be introduced, that would cap the needed units to most bachelor’s degrees at 120.

In the proposal, a number of degrees – including architecture, landscape architecture, fine arts and music degrees – would be exempt from the required maximum, and campuses may request exceptions on a case by case basis.

CSUN President Dianne Harrison commented in favor of the change, stating that eliminating excess units would make space for at least 400 more students per year.

“For me, because the proposed changes reduce the cost for students, make additional financial aid funds available to more students and increases access for incoming students, I support this proposed change and I hope the board members will also,” said Harrison.

Board members will vote on the proposal at their January meeting.

Also at the meeting, a tentative collective bargaining agreement was reached between the American Professionals of California and the CSU.

Also discussed were a variety of informational reports, including an update on the CSU Troops to Trades program which would focus on a special relationship between the California Department of Veterans Affairs and the university system.

The program would focus on training returning military on 10 trade programs, including electrician, carpenter, auto mechanic, plumber and more. A pilot program is set to be tested on nine campuses.

Many CSU board members and public commenters commended efforts to pass Proposition 30. Karen Zamarripa, assistant vice chancellor, thanked a variety of student and faculty organizations and remarked on the importance of young voters in this last election.

“Many young people in the state said that what they wanted from government was different and they wanted to reinvest in a way that we have not had the opportunity to do in some time,” she said.