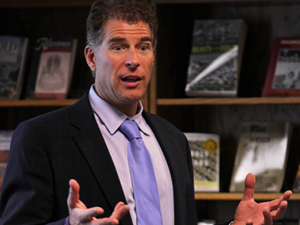 Author Paul Zak talked to a crowd of more than 100 people about his extensive studies on how the chemical, oxytocin, helps people become more comfortable and sociable.

Zak spent 10 years conducting extensive studies on oxytocin, including spending time in Papua New Guinea with native tribes. The research and results are published in his book “The Moral Molecule: The Source of Love and Prosperity.”

“For years we’ve been investigating all these aspects of how events can create a social bond,” he said.

Zak showed several clips on studies he had conducted from measuring oxytocin levels in blood before and after a wedding to mishaps during his research in Papua New Guinea. Through all of his studies, Zak measured oxytocin levels through blood samples.

While in Papua New Guinea, Zak said his team ran out of liquid nitrogen, which keeps blood samples from spoiling. A research team in Japan that hired him was so dedicated to the project that the team flew in more liquid nitrogen.

Zak said his studies in Papua New Guinea provided evidence that oxytocin is a chemical that affects humans the same way universally.

He said 25 to 40 percent of the prison population is psychopaths, but overall only accounts for about 2 percent of the general population. This portion of the population has inadequate oxytocin receptors. At the end of the lecture he was asked if these groups can be successful through other means.

“People who are high in the psychopathic scale don’t have very stable lives,” he said. “But there are some adaptive psychopaths.”

One example Zak used was a judge who handled death sentence cases. The man had confided in Zak that he did not feel any empathy for the people he sentenced. Zak said he suggested the man seek therapy because there was nothing he could do and told the audience that empathy is part of the effects of oxytocin.

“It’s empathy that drives us to behave in socially appropriate ways,” he said. “It makes us moral.”

Zak was asked to give a lecture as part of a once-a-semester series known as the Richard W. Smith Lecture on Cultural Studies.

Richard Smith attended the event and had started the semester series in 2003 after he retired from teaching at CSUN. Smith said that whenever he reads a book that he thinks could be interesting for students he tries to organize a lecture.

Zak signed books for attendees at the end of the lecture and provided hugs to anyone who was comfortable enough. He had been dubbed “Dr. Love” by a reporter from New York and sticking with the title, provided advice for the audience.

“Touch releases oxytocin,” he said. “So I’m going to suggest that everyone have at least eight hugs a day.”