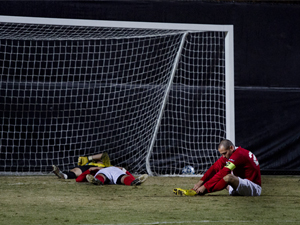 The Matadors’ season came to a screeching halt Thursday night on a golden goal in double overtime against the visiting University of San Diego Toreros as they fell 2-1 in the first round of NCAA Tournament play.

Earning their first NCAA berth since 2005 and first Big West Conference Championship, the Matadors were looking for a season sweep of the Toreros, having beaten them 5-0 earlier in the season.

Both teams felt each other out early in the game, battling back and forth for possession to control the game’s pace. CSUN’s offense came out of the gates timidly, something not normally seen from them.

The Matadors started the game without redshirt senior defender Joe Franco, the 2012 Big West Defender of the Year, who went down with an injury during the Big West Championship game.

Putting Northridge’s top-ranked defense to the test, the Toreros ran multiple attacks towards the goal. A header by senior forward Patrick Wallen on a cross early in the game tested senior goalkeeper Michael Abalos, forcing him to drop to his knees for the save.

Working together as a team on both sides of the ball, the Matadors repelled attacks by the Toreros, including a diving stop by senior midfielder Rene Anguiano on a ball that sailed over a sliding Abalos.

Returning to their normal aggressive offense in the second half, the Matadors slowly started to challenge the Toreros.

“It was just the attitude of going forward and facing the field, pushing the ball forward, forcing the action, breaking their first line of pressure that allowed us to go forward,” said Davila about the second half changes.

Abalos, the 2012 Big West Goalie of the Year winner, showed why he won the award this year in the 53rd minute of play when San Diego had three chances to score within seconds of each other. Abalos saved all three shots consecutively, conserving the 0-0 tie.

Sophomore forward Sagi Lev-Ari, the Matadors leading scorer this season, broke the draw in the 73rd minute of play, coming off a goalie kick by Abalos that nearly traversed the entire field. Running up the left center of the field, Lev-Ari dodged a collision between the Toreros’ goalkeeper and his teammate, and put the ball in the back of the net.

CSUN’s defense was left to repel attacks by a now desperate San Diego team with time winding down. A long free kick on the right side by senior midfielder Dan Delgado in the 89th minute sent the game into overtime as it wound its way over both teams and hooked into the far left corner of the goal untouched.

Entering overtime, the defensive nature of the game returned as both sides failed to capitalize on offensive opportunities, forcing the game into a second overtime.

The Toreros wasted no time as they came out firing, using a free kick opportunity in the 101st minute to nearly end the game.

Less than two minutes later, a pass from Delgado to sophomore midfielder Connor Brandt resulted in grounder that slid into the right corner past a diving Abalos.

“Once you get here you get greedy, and it hurts, I feel bad for the players that don’t get another opportunity to go do this,” Davila said. “I’m just very proud of our seniors who brought our program back to the national level.”