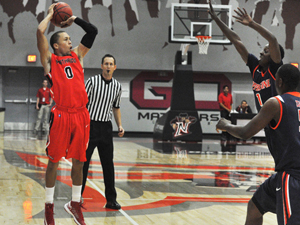 Recovering from back-to-back off-shooting games, junior guard Josh Greene exploded for a career-high 28 points and led the Matadors to their best start ever with a 92-76 win over Tulsa (3-1) Saturday night in the third game of the National Urea Cycle Disorders Foundation challenge.

Greene, who averaged 11 points per game on 24 percent shooting in his last two outings, went a flawless 16 for 16 from the charity stripe and shot 6 of 12 from the field. His free throw total is the second-best for a single game in 55 years of CSUN basketball.

He also tallied five steals and handed out seven dimes, extending his streak of being the team’s assist leader to four.

“Josh struggled early, but he pulled it together and hit some big shots,” said head coach Bobby Braswell in an interview with Northridge Athletics. “That was an MVP style of game for Josh. We needed that from him tonight.”

Redshirt sophomore guard Stephan Hicks struggled from the field (4 of 13) after leading CSUN’s scoring assault two games in a row, but like Greene managed to go perfect from the foul line, hitting all seven of his attempts. Hicks and Greene have combined to make an eye-popping 97 percent of their free throws over the last two games (33 of 34).

Northridge put up a strong defensive effort, holding Tulsa to 35 percent shooting going into the half up 40-26. But a defensive lapse which allowed the Golden Hurricane to pour in 50 second-half points was made up for a by a late 14-3 run that pushed the Matadors lead to 90-72 with 34 seconds left.

“I told the team at halftime that Tulsa would come out swinging at us in the second half,” said Braswell in the same interview. “We were either going to stay flat or we were going to pickup the level of intensity. And we responded.”

Also helping the Matadors off the bench were freshman center Brandon Perry, who put in 16 points and and six rebounds in just 20 minutes of play and freshman guard Landon Drew, who chipped in 10 points on 4 of 7 shooting.

The Matadors remain the only undefeated team in the Big West Conference at 5-0.