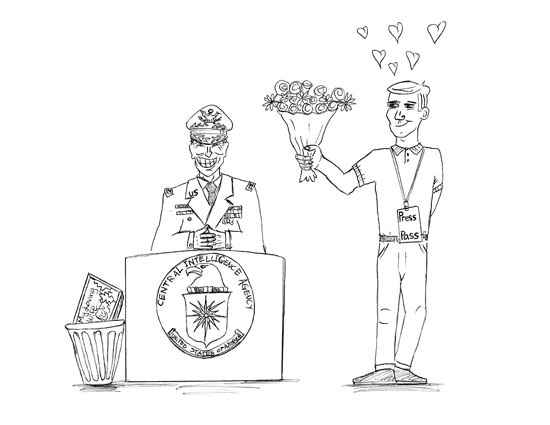 While the sexual revelations of former CIA Director Gen. David Petraeus have been exploding in the media, it is equally important to observe and analyze the cozy relationship the media had with Petraeus and politicians in general.

Our exposure to these highly elevated leaders in our country is mostly buffered by how the media present them in their reporting. If we can’t trust our major media outlets to give unbiased and uncorrupted coverage, we all lose.

The biggest journalistic mea culpa on the Petraeus affair has been put forth by Wired magazine’s Spencer Ackerman.

Ackerman has been at the forefront of reporting when it comes to our changing military structure in the realm of technology. His “Danger Room” column does an outstanding job dissecting this centuries’ wars and how the battlefield is constantly evolving.

Yet, his access to important figures and information led to a complacency that affected his journalistic duty to be critical and impartial. In this case, it was Petraeus. Ackerman admitted that he often questioned anything negative about Petraeus in order to maintain access to the general.

It’s an interesting tightrope to walk. As reporters, we need access to develop a cohesive narrative for our pieces.

Oftentimes, sources are less than charitable when it comes to interviews and information and the presence of a press pass around your neck or voice recorder and notepad in your hand multiplies that hesitancy 10-fold. We are faced with a barrage of pre-screened question requests or quote approval. Sometimes interviewees want to read a story before it’s published or even offer to help out with a piece by becoming part of the story — totally violating journalistic ethics. Integrity is a journalist’s most valuable asset and without it, we lose the confidence of our readership.

As a student journalist, it’s easier to sit back and analyze what’s wrong in the media industry when it comes to news. Idealism is what drives most of us.

We want to add our voices to a proud tradition and fix what we see is wrong. We aren’t yet entrenched in the politics of access and that gives us the ability to see what’s really wrong in media today.

Perhaps the most egregious example of media complicity is the annual White House Correspondents’ Dinner.

Here is a night filled with celebrities, politicians, and punditry. They tell jokes and break bread together. I’m sure it’s quite the event to attend, but from the outside, it reeks of greasy gamesmanship.

The so-called journalists who are supposed to be covering both the positive and negative happenings in D.C. politics are seen dancing on stage with various party strategists and politicians.

While it is probably an innocent affair as a whole, the result is somewhat tragic. The integrity of journalism is taken down a notch due to the implication of impropriety and special relationships. The damage is done in this regard and journalism as a whole is tarnished.

The recent mainstream acceptance of quote approval is another example of tangibly gross journalistic practices.

Quote approval evolved as a means of access for journalists. The interviewee was able to change and massage what they wanted to say and most major publications used this abusive practice. The New York Times took a stand against it in September and agreed to abandon the practice, but the damage had already been done.

These practices have done nothing to advance the cause of journalism. Our responsibility to report fairly and accurately is enshrined in our constitution. That speaks volumes about what our early leadership thought of the role of the press. We can’t continue to abuse that privilege and expect to be taken seriously.

As journalism becomes an entertainment commodity, maintaining our duty of reporting the facts is harder to accomplish. The incestuous and masturbatory behavior that occurs in newsrooms across the country is disgusting and it’s turning people off to legitimate news.

While the entire Petraeus issue has been anything but positive for our country’s security and well-being, we can at least see that facade of journalistic bias start to be broken. Self-reflection is needed, and we’ll all be the better for it in the long run.

—Nathan is a senior majoring in journalism who sees a lot wrong with the state of media but also sees quite a bit right in the journalists of tomorrow around him.