From Catholic, to atheist to spiritual: one student’s discovery of the science of the soul 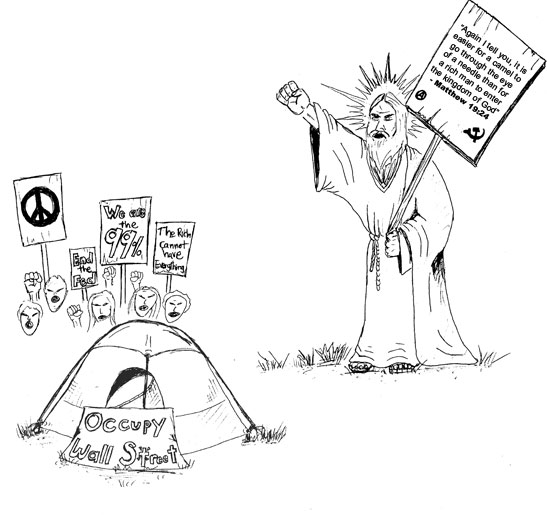 Growing up Catholic makes it easy to become an atheist.

Like most Chicanos in the San Fernando Valley, I was a small, unsuspecting baby when I was baptized by the Catholic Church – too tiny to offer any protest or clarification.

And my fondest memories of going to mass were not the service or the priests reciting scripture, trying to connect biblical morality with everyday life. Instead, it was sneaking out with my younger brother and cousins to go to the local liquor store to play Metal Slug or Street Fighter II arcade games.

Eventually, my brother and I were placed in weekend Catholic school to prepare us for our first communion and confirmation. After a curriculum of the dogmatic Holy Trinity and what it meant to be a good Catholic, the Book of Job and its ambivalent morality of an unquestioning servant that has to suffer as an experiment by both God and Satan and the panic of having to confess before priests had all but destroyed any hope in continuing with Catholicism.

Growing up with a religion that doesn’t promote dialogue with other faith traditions is doomed to narrow-mindedness. My weekend school teachers did not promote criticism or open-mindedness, which caused me to completely break away from the Catholic church.

I came to identify as an atheist, having made the sweeping generalization that only young teenagers can make – that if my religion was like this, all religions were like this. I began to pursue social justice activism in middle school and more seriously after high school. There was no room for religion in my life. Through activism I learned the philosophy of materialism (not to be confused with consumerism) which views the world as only definable by material forces. Materialism is the opposite of idealism, which is the birthplace of the abstract and religion.

It took me more than a decade later, in a different country, to see the important role religion has played and is still playing in social justice movements. It was through an effort to organize rural farmers in El Salvador that I encountered what I thought was a paradox; a communist evangelical preacher who was organizing the poor and spreading the teachings of Christ. He did it in complete harmony, for Christ was an ancient crusader against empire and the rich, ruling class. Did Christ not prefer the company of the homeless, laborers, prostitutes and the downtrodden? Using Marxist dialogue, we would call them the proletariat and the lumpen-proletariat.

This experience with the paradoxical minister, coupled with a long discussion with a friend on thermodynamics and the nature of unbreakable, permanent energy, made me question my rather unscientific leap to atheism. The first law of thermodynamics states that energy is forever and only susceptible to change. Maybe the soul – as a person’s essence – is a kind of energy that is never destroyed, but altered after death.

Through these realizations, I have come to view the world’s religions not as inherently evil, but rather fragmented and fundamentally flawed when separated from each other. I believe that religions can only truly benefit society as a whole by coming together and reach realize their commonality, transcending differences for the greater good of service and devotion to our fellow brothers and sisters.

In this sense, I am not religious, but spiritual. I don’t subscribe to one denomination or faith tradition, but I believe in the essence of good that transcends human division. I believe in the soul as a source of compassion and shared energy that inhabits all people and life on planet.

Spirituality allows for interfaith work. I now work with Interfaith Communities United for Justice & Peace, a group that promotes social justice activism and works with the religious and non-religious communities to end war and renounce violence. With them, I am at home, in peace, in complete harmony, especially since most of them are far more radical than I am (many openly critiquing the damaging role of capitalism and imperialism).

Spirituality and noble selfless goodness, I have found, can be outside of the confines of organized religion. To be spiritual does not necessarily require one to define God, or believe in the concept of a definable, complete God. Spirituality allows for open-ended questions, for constant questioning and a journey to become.