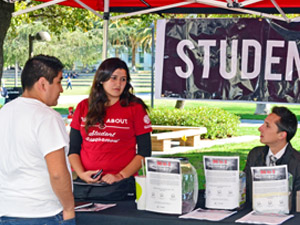 The Associated Students (A.S.) held the first day of its Hurricane Sandy donation drive on Monday, dubbed “50 in 3.” The relief effort will be continuing through Nov. 21 before the Thanksgiving holiday.

Hurricane Sandy caused widespread power outages and subway shutdowns and according to the Washington Post, the storm may be the second most expensive storm in U.S. history. Sandy has caused an estimated economic loss of $30 billion to $50 billion. An estimated 121 people have died in the storm, with 43 coming from New York City alone, according to Reuters.

Sarah Garcia, 20, A.S. senator for the College of Education, wrote the resolution for the fundraiser.

“It’s our attempt in giving back to all those who helped us rebuild after the Northridge earthquake,” said Garcia. “We’re asking the USU board of trustees to match our donation of at least $36,000, a dollar for every student.”

A.S. kicked off its efforts on Monday near Sierra Tower. All proceeds will be going to the American Red Cross Hurricane Sandy relief efforts, providing meals, shelter and hygiene kits for those in need on the East Coast.

Matthew Delgado, 21, a junior double-majoring in English and photojournalism, has donated his time and money to the campus efforts, helping A.S. raise money.

“Students should be involved in these disaster efforts however they can,” said Delgado. “It’s important to care for those on the East Coast because we’re all human. I think this is a great effort.”

Other relief efforts have been in the Los Angeles area. On Nov. 2, NBC networks held an hour long live benefit telethon, “Hurricane Sandy: Coming Together,” featuring performances by well-known artists. All proceeds were donated to the American Red Cross relief efforts for Hurricane Sandy. Viewers were encouraged to donate $10 or more via text throughout the program.

Anthony Bennett, 22, senior at CSUN and associate producer of promotions for A.S. productions, was also supporting the effort on Monday.

“(Sarah) asked me if I wanted to help and I thought it was a great idea,” said Bennett. “I don’t have much money to donate, but at least I have the opportunity to ask the student base for its help.”

A more local relief effort is the Children’s Hunger Fund of Sylmar. This non-profit organization has sent aid and relief to Hurricane Sandy victims by gathering resources from corporate and ministry partners, including cash and bulk food donations.

Today, A.S. will be on the Oviatt Lawn from 10 a.m. to 2 p.m. and continue the donation drive tomorrow on the Matador Bookstore lawn.

“We as a student body need to fight against apathy,” said Cohen. “It’s easy to only care about what is affecting you, but it’s important to remember we’re one nation connected in total experiences, good or bad.”