Capturing their first Big West Championship since the creation of the conference tournament, the Matadors’ successful season ended prematurely in the first round of the NCAA tournament when they fell to San Diego.

Rebounding from a 2011 campaign that saw the Matadors fall short of the playoffs, the 2012 team came out fast and furious, showcasing improvement on both the offensive and defensive sides of the ball.

“With the guys that we brought in this year, (the) freshmen and transfers, they really stepped up this year along with guys that returned,” said redshirt senior defender Joe Franco. “We had a mentality that in the preseason we had a squad that could really take us far.  Positive thinking from the get go really pushed us through the season along with the coaches and staff and a mindset of wanting to win.  We felt we could really go far with the squad that we had.”

Matching their highest win total (15) under head coach Terry Davila, CSUN was ranked in the top 25 multiple times throughout the season. Keeping up with the national buzz about their powerhouse season, Northridge recorded its first win at Santa Barbara – who at the time was a team ranked in the top 5– since 1999 and also brought down the Sweet Sixteen bound USD. 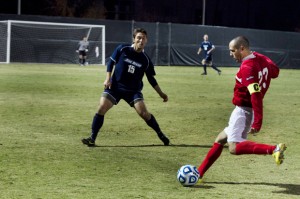 Competing in their first NCAA Tournament since 2005, the Matadors hosted unranked University of San Diego, losing a heartbreaker in double overtime, 2-1. 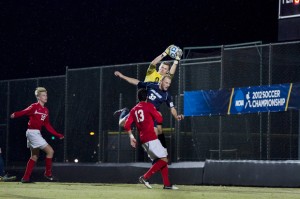 Abalos helped his case for Goalkeeper of the Year by shutting out nearly half of the teams they played (10 out of 22).  Ending his career at CSUN, Abalos ranked second in school history in games played in goal with 73, second in wins with 30, second in shutouts with 22 and third in saves with 268.

An active and powerful offense helped separate CSUN and its opponents by wide margins, scoring four or more goals four times on the season.  Averaging nearly 16 shots per game, the Matadors scored an average of just under two goals per game, ranking them at the top of the Big West Conference in both categories.

Leading scorer sophomore forward Sagi Lev-Ari tallied 15 goals throughout the season — including the only Matador goal in the NCAA tournament — to lead the Big West Conference.

Looking to the underclassman to provide and assist a highly touted defense will be something necessary in order to duplicate the 2012 season.

“It was a really great season despite the way it had to end, and we accomplished a lot, laying down a  foundation for the upcoming year,” Franco said.