There is no team in sports journalism 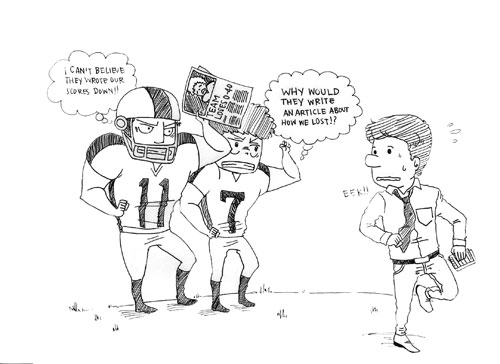 The job of a sports journalist, or any journalist for that matter, is not a simple job. Good reporting requires multi-tasking, making tight deadlines, approaching people with sensitivity and without bias, among many other things.

My job this year was to cover women’s and men’s soccer and my stories focused on both the positives and negatives of the team’s performance, win or lose. Recently, an article of mine published about the CSUN women’s soccer NCAA Tournament game received some criticism from student athletes, who said that it was too harsh on the team and did not laud their accomplishments for the entire season. They said the article was written as if it were by someone from the opposing team’s paper, not our school’s paper.

Student sports journalists may write for the Daily Sundial newspaper, a CSUN-related entity, and have school pride, but we must report accurately on the development of each game and we will not portray the team in a positive light just because we are affiliated with CSUN.

To be a fair journalist, I cannot be a fan of the team or wait with baited breath for the outcome of the game. While many writers will become a fan of the sport they cover – which they may not have been before, as was my case – that is as far as our cheering goes. A fan is someone who can go to the game and yell their support or express their disappointment without repercussions. It is unethical for journalists to allow their favor for a team to manifest in their work.

Reporting on games is not the same as writing a season recap – I must cover each game in real time and have no need to refer to previous games or accomplishments from the season. Whether a team that I cover does well or badly during a certain game, I use verbs and adjectives in my articles to paint a picture for the reader and I can not understate or exaggerate the team’s performance to lift the players’ spirits.

The only outlet to express any bias is through a sports column. However, columns take research to write and are not just simple game recaps.

My job and the reputation of my paper are on the line for every article that I write. During games, I must observe and take notes throughout, following the action at all times. I do not have time to socialize with friends or to grab food or drinks and relax, for it is my responsibility to inform readers of what is going on. I am required to update our readers throughout the game on the Sundial Sports twitter account, @sundialsports57.

A controversy last month at Kansas University between the University Daily Kansan and head football coach Charlie Weis highlights the sometimes uneasy relationship between media and who they cover. The paper reported the facts on their school’s football team, which had been an utter disappointment throughout the season, accompanied by a caricature depicting a slaughter of their mascot in their upcoming game over previously unbeaten Kansas State. Weis later ranted on his twitter account, @coachweiskansas, about how he felt regarding the article, later deleting the tweet.

“Team slammed by our own school newspaper. Amazing! No problem with opponents paper or local media. You deserve what you get! But, not home!”

Weis wrongfully assumed that it is allowable for local media or opponents to criticize his team, but not for the school paper, expecting some kind of loyalty.

The Daily Sundial is a student run and produced newspaper, and our mission is to report on news that affects the campus and the local community. The Sundial does not function as a public relations mechanism for the school, but produces content which explores all “sides” of a story. When something happens, good or bad, we try our best to inform our readers about it.

As student sports journalists we are training to one day work for ESPN, the L.A. Times, or other media outlets, but we deserve the same respect given to other journalists. Those who beat write for professional teams must report both the good and the bad on a daily basis, just as we do. While the school paper is staffed by students, we follow the same guidelines set forth by the Society of Professional Journalists that all newspapers follow.

No one is perfect and as journalists we do make mistakes, admitting and correcting them when we do. We must walk a fine line between what is right and what is wrong in every article. It is not that we do not support our teams, or our school, but it is our responsibility to report from both sides of the issue equally.