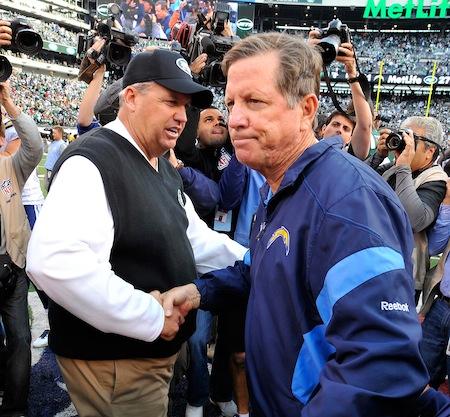 Many familiar faces returned to the helm of their respective teams this season but after a shaky start and inconsistent play, these coaches may be on the way out shortly.

Am I missing something here?

Can someone explain to me how Andy Reid, a pass-first coach who has failed to produce a single championship run for the Eagles since being hired in 1999, still has a job amidst a six-game losing streak?

Sure, his current offensive line is battered beyond belief and he’s stuck with a mediocre quarterback who signed a long term deal, but this doesn’t excuse his past failures and his ardent unwillingness to run the ball despite having top-tier running backs — or losing six straight games.

Reid, who is known for having a run-to-pass ratio hovering between the high 50s and low 60s, consistently makes the mistake of giving an unacceptably low amount of carries to star running back LeSean McCoy — the same treatment he gave to Brian Westbrook, whose early career was blanketed by Reid’s offensive philosophy.

What’s clear is that this ideology doesn’t work — at least not without a superstar quarterback.

Under Reid, Michael Vick is getting a similar green light as he gets nearly 20 attempts per game while McCoy only rushes 16.4 times per game, a number way too low for a guy who’s averaging 4.7 yards per carry. Vick hasn’t been impressive either, putting up a combined passer rating of less than 90 throughout his last three seasons.

Last year, the Eagles missed the playoffs and finished with a 8-8 record despite making numerous key offseason signings which brought in marquee defensive players like Nnamdi Asomugha, Cullen Jenkins and Dominique Rodgers-Cromartie. Their 3-7 start this year signals it’s time for a change — one that has Reid replaced with someone who’s willing to put the rock in McCoy’s hands.

Currently, the Eagles may not find a better overall coach, but ridding Reid is a step in the right direction as the franchise is in desperate need of a massive overhaul due to its $90 million roster playing on par with the Cleveland Browns.

Norv Turner- San Diego Chargers
Many people are quick to blame the Chargers’ problems on Philip Rivers, whose performances in the last two seasons have demoted him from a top-tier passer to a middle-of-the-pack quarterback.

Though Rivers has thrown a combined 34 interceptions in the last 27 games to go along with nine lost fumbles — 18 of those turnovers coming this season — San Diego’s 4-7 record isn’t entirely his fault. He’s driven the Chargers’ offense the last two years to a 24 points per game average while throwing 45 touchdowns and 270 yards.

So who’s to blame for San Diego missing the playoffs for the third straight season? Look no further than head coach Norv Turner.

Turner, an offensive-minded coach who is not known for his defense, has carved out a nice little niche for himself the past couple seasons: finding a way to lead his team to devastating losses despite building large first-half leads.

The Chargers started the month of October with back-to-back losses to the Saints and the Broncos, both of which being games they should have won. San Diego led New Orleans by 10 points at halftime, but gave up 17 points in the second half to lose the game. Against Denver, they allowed 35 unanswered second-half points, handing the Broncos an incredible win as they trailed 24-0 at the half.

They’d continue to win just one out of their next five games since, including another one where they dropped a large halftime lead as they scored just three points in the second half to lose 24-34 against the Buccaneers.

This last Sunday’s overtime loss to the Ravens — which saw their defense give up a 30-yard catch and run to Ray Rice on a 4th and 29 — just highlights Norver’s incompetence as a head coach and is more than enough reason to fire him. San Diego’s roster has more than enough talent to be a playoff team, but Turner’s ineptitude continues to hold them back.

There’s a reason why the Ravens chose to hire John Harbaugh instead of promoting then defensive coordinator Rex Ryan to head coach in 2008 and the Jets are finding out why.

I’s time for the Jets to end the Ryan experiment and clean house in New York. The team of general manager Mike Tannenbaum and Ryan experienced too much success too early and owner Woody Johnson needs to send them to “have a snack.”

NFL fans across the nation were wishing that the outspoken Ryan was their team’s coach in 2009 and 2010 when he took over the Jets and led them to the AFC Championship two years in a row. He displayed his lovable, confident personality on HBO’s reality show “Hard Knocks,” which catapulted his popularity in the NFL world.

The Jets backed up their confident coach by getting to the AFC Championship two straight years by running the ball and playing good defense. The decline of the team started when Ryan and former offensive coordinator Brian Schottenheimer decided to steer away from their hard-nosed approach to the game and tried to finesse their way to victory.

In 2009, the Jets led the league in rushing and total defense. They then let go of workhorse running back Thomas Jones in favor of an unproven Shonn Greene and an over-the-hill Ladanian Tomlinson.

The next year, the rushing game fell to fourth in the league and the defense fell to third.The decline continued as Ryan and Tannenbaum brought in big names that did not fit the hard-nosed mentality the team was successful with. Players with big egos like Santoio Holmes, Plaxico Burress, Antonio Cromartie, Tomlinson and the most recent debacle, Tim Tebow tore the locker room apart.

The locker room tensions came to a head earlier in the year when players started taking sides in the quarterback battle between Tebow and Mark Sanchez. Some publicly stated their preferences while others anonymously criticized Tebow through the media.

These exploits are the final straw for Ryan who has clearly lost control of a team of superstars. In his first two years as head coach, the Jets were a run first team. They then became a more balanced team. Now their a team of dysfunction with chaos as their identity.