The girl who never gives up 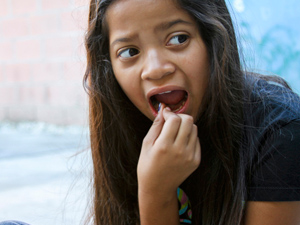 Chabelita Moreno is an 11-year-old who just started sixth grade. Like most sixth graders, she is full of energy, curiosity and loves making new friends. However, she is not an ordinary sixth grader. Chabelita was diagnosed with a rare deficiency called Succinic Semialdehyde Dehydrogenase when she was 18 months old.

SSD deficiency is a rare inborn disorder that can cause a variety of neurological problems. Children with this condition typically have developmental delay, especially involving speech development, intellectual disability and decreased muscle tone soon after birth. According to the National Institute of Health, only 350 cases have been reported worldwide. There is no cure for this rare deficiency.

Chabelita started having seizures when she was 9 months old and more followed after that. Her weak muscle tone did not allow her to start walking until she was 2 years old. Her speech delay still has not completely developed but with speech therapy classes, she has been able to communicate much more.

Her parents have struggled to provide what is necessary to improve her mental development so she can gain a normal life. She still struggles to do many daily activities, like brushing her hair, tying her shoes, brushing her teeth and getting dressed.

Despite her disabilities, her hyperactive personality exceeds everything else. Chabelita is very talkative, loves meeting new people and is very outgoing. Dressing up is one of her favorite activities and singing and dancing brings out her inner diva.

Even though Chabelita has a long way to go, she is a lovely girl, who loves to sing, dance and go to school. With the help and persistence of her parents, she has been able to walk, communicate better and in the near future, speak.