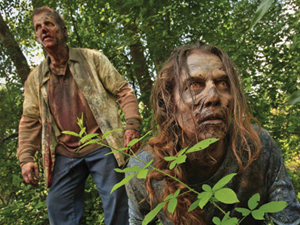 Casey Delich
America’s most popular cable show, “The Walking Dead,” is near their third mid-season on AMC, looking at the good and bad in humans during the zombie apocalypse.  Created by a staff of writers and producers, Scott M. Gimple, a writer on the  show, sat down with the Daily Sundial to discuss writing and The Walking Dead.

The Daily Sundial: What got you into writing?
Scott Gimple: “When I was about eight or nine years old, I started reading comics, I had just moved to New Jersey, and one of the first things I remember doing was going to a newspaper stand with my dad.  I hadn’t thought about comics until that point, saw them in front of me and picked up a bunch.  I started reading them with the letters, columns, I came to think about how they were being written.  It might have been right around the same time the big movies were coming out, I realized the stuff was written, and I started doing it myself.  Writing stories and comics, finding it really enjoyable, and whether people were humoring me or not in school with people liking what I was doing was encouraging.  From an early age I wanted to become an assistant editor out of college at DC Comics, then hopefully become an editor, then hopefully get into writing like I had seen a lot of editors do.  Hopefully someway be able to Segway into TV and movies as well.  It’s basically the plan that I have been following, following the life plan of a nine year old.”

DS: Advice for those interested in writing for the industry?
SG: “The number one thing to do is to write.  Make sure you enjoy it, that it is something you love doing, that you would do regardless of whether you were paid or not.  There are periods where you are paid, and periods where you aren’t paid.  It shouldn’t be something that is a chore that you hate doing.  To somebody in high school or college, find your voice, because when you are ready to go looking for a job you will have a portfolio and examples.  Don’t be writing about writing all the time or reading about it, get a well-rounded education so it can translate to your writing style.  Definitely should not be able to just write the way you speak, the way you live surprise yourself and not fall into a rut, make yourself imaginative.”

DS: How did you get hooked up with “The Walking Dead”?
SG: “I didn’t have any connection to the show, I didn’t know anyone that worked on the show, it was just gratuitous.  It was some good agent thing by my agent, they had some turnover in the staff after the first season and they were looking for new writers.  My agent got my material to AMC, AMC liked it.  It was a long process meeting with Glen Mazzara, Robert Kirkman, and others.  Meeting a ton of people was like trying to get through to the Supreme Court, I was a little nervous coming on the show having been on a lot of shows with a lot of one seasons and out with a lot of drama behind the scenes.  It’s been a terrific experience and I definitely enjoy the people I work with.”

DS: Were you a fan of the comics?
SG: “I was reading through the trade paperbacks a little slowly, I was not a monthly reader, I have since shifted to a monthly reader.  It’s a very interesting thing to read the book in a smaller collection rather than a multi-issue collection.  It sort of changes the way the story hits you, the monthly one, is a lot more intense than the shock of a collection where you can turn the page and see the next issue.  I have read the whole series about three to four times, and I am often intimidated by it while we work on the TV show, I love it.  My number one fear is whether or not we are doing it justice.”

DS: You wrote some of the biggest turning points in season two, how did it feel writing them?
SG: “I was really excited, the first one I wrote was episode three where Shane kills Otis.  We had broken stories together in the room, the general story and certain incidents, and that was a story that had evolved out of a pitch that I had made.  We were asked which episode we wanted to write, and everyone wanted to write the episode, it just so happened that I pulled the right straw.  I had a lot of ideas about it, the way the teaser played out, I really lucked out.  Because I did that one, I was in the right place of the rotation to do the mid-season finale.  Doing that episode was one of the best experiences I’ve had in TV.”

DS: Does the show go strictly off the comics?
SG: “The Walking Dead” TV universe is pretty different from the comic universe.  Just to start, theirs characters on the show that weren’t in the comic books.  Things are markedly different from the comic book, but in the same respect we go through periods where we circle around the comic book and use more here and there.  I enjoy writing stuff inspired by the comic book and take a little turn, to surprise the reader and viewer, to heighten the scenes and emotion of the characters on the show.  Robert Kirkman is there in the room with us every day and he is always excited to play around with what he has created.”

DS: What would you do in case of a zombie apocalypse? How long could you survive?
SG: “First I’d like to answer with Robert Kirkman’s answer ‘he would jump off a bridge immediately,’ he just figures he would be dying horribly.  I definitely would not do that, I think about this a lot, if I was in LA I would head to Catalina Island.  I’ve never been to it, I don’t know a lot about it, I know they have some farming, buffalo, and bison.  Getting onto an island is probably the smartest thing, it is more manageable as far as population goes.  If anyone dies though they turn into a zombie and can start the infection and crisis all over again.  One of the biggest parts of the show, I believe there is a good side and a bad side of man.  People don’t just becomes monsters when crisis strikes, some people do and some people don’t, I think people could work together to survive.  Being an optimist I could survive and have a long life.