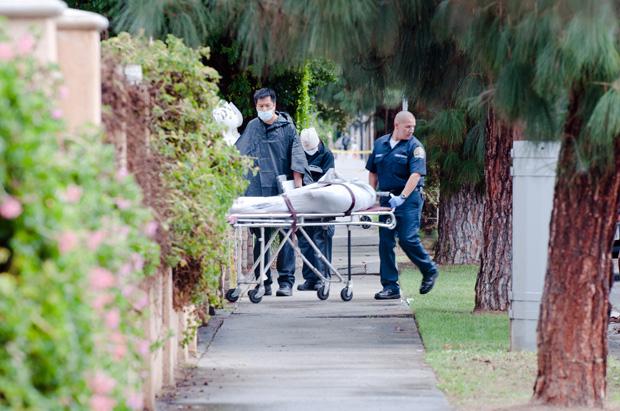 A dead body is carried out of a Granada Hills residence by county coroners, Sunday. Four bodies were found in the 17400 block of Devonshire St. after police received a call about shots fired. Photo by: Charlie Kaijo/ assistant photo editor

No additional information has been released on the victims, according to LAPD’s media relations, and no weapon or suspect has been found.

Ed Winter, assistant chief of investigation at the LA County Coroner’s Office, said they are releasing no information due to a security hold that has been placed on the case by LAPD.

Police identified the four victims as Asian American, according to Commander Andrew Smith of the LAPD. The two female victims were in their mid-20s, one male was in his mid-30s and the other male was in his late 40s.

The investigation is still ongoing, but Smith said they have ruled out murder/suicide and believe the shooting was a homicide.

“We’re interviewing a number of witnesses and trying to get a coherent picture of what happened,” Smith said.

A thorough search of the house is still in progress and the weapon has not been found.

The victims appear to have been targeted and three of the four were found face down, the other was hunched over when police arrived, according to Mitchell Englander, 12th District Councilman and reserve LAPD officer.

There is indication that residents of the house the shooting occurred in front of may have known the victims.

It has been confirmed that the house was an unlicensed boarding house, some doors are sealed shut with the only entry being through windows and others are blocked by debris.

Four bodies were found in the 17400 block of Devonshire St. Sunday morning after police received a call about shots fired.

“The call came in as ADW, shots fired, which means assault with a deadly weapon,” said Commander Andrew Smith with the Los Angeles Police Department.

Eight or nine people, possibly more, were inside the house the shooting occurred in front of, all providing officers with conflicting statements, he added.

Officers conducted a perimeter search and found no weapon or suspect, Smith said.

“We checked the area and found nothing suspicious but are following leads,” he said.

Smith said at this time it is too early to tell the race and ethnicity of the victims.

“We have nine robbery-homicide guys doing their job right now,” Smith said. “We’ve sectioned off the house and mapped all the cars that were parked in the area, including who they belonged too.”

Mitchell Englander, 12th District Councilman and reserve LAPD officer, who was on scene, said the home appeared to be an unlicensed boarding house.

“The victims were dressed in regular street clothes,” said Englander, chairman of Public Safety. “(The shooting) appears to have happened outside the home on the property.”

“This is a safe neighborhood,” said Englander.

Jeff Kaye, 63, lives a block from where the shooting happened.

“I heard helicopters around 5 this morning when my son was getting ready to leave for work,” said Kaye, CSUN alumnus. “You always wonder what’s going on, but when you see the spotlight, it makes you wonder how close it is.”

Kaye said if you call Devonshire Police Department, they will usually tell you what is going on.

“I knew it wasn’t too close because my neighbor’s dog wasn’t barking and he barks at everything,” he said.

Kaye agreed that the neighborhood is relatively quiet, with the exception of a few incidents here and there.

“Most people around here are retired, older people,” he said. “I’ve lived here for 33 years and you’ll see police cruising up and down the street. It’s not ominous, but it gives a sense of safety.”

As of now, there is no suspect information.

“Anything we find is speculation until the coroner examines the bodies,” Smith said.

If anyone has any information, the LAPD can be reached at 877-LAPD-247.