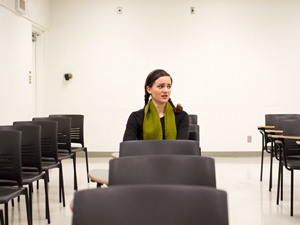 Community college students are being shut out of classes by other students who continuously drop courses after the add deadlines.

“I remember the first days in my speech class there were people standing around trying to add, but in a few weeks, a little less than half of the class dropped,” said Sergio Reveles, 19, nursing student at Mission College and Valley College. “It was ridiculous how many students missed the opportunity to add.”

Sam Lingrosso, adjunct associate political science professor at Valley College, said in the five years he has been teaching he has seen this happen every semester.

This fall, one of his political science classes started out with 47 students and had 17 drop; another course saw 42 enroll,  then had 10 students drop.

Students are taking seats in classes they do not intend to stay in, which prevents a lot of students from being able to transfer said  Pierce College student David Avila, 20.

“When I go sign up for the classes that I need, they’re full — so I don’t bother trying to add because I know I won’t get in,” Avila said. “That’s why it’s taking longer than I expected to transfer.”

Pierce College student Fatima Jimenez, 22, has been a witness to this during her three years at the college.

“I see it happening more. It is a problem because students who need a specific class miss out on the opportunity to take it and have to wait a whole semester for it again,” said Jimenez, a biology major. “It’s happened in at least half of the classes that I have taken. English and math are the (classes) that I’ve seen it happen the most.”

All community colleges in California are now using a three-attempt policy, said Doreen Clay, public relations manager for Pierce College. This new policy limits students to three attempts at taking a course. If a student has not successfully completed the course by the third attempt, they are no longer eligible to enroll in that class at the same college or community college district.

In addition to the three attempt policy, College of the Canyons in Santa Clarita also uses the Standards for Progress Probation.

“What this means is that a student will be placed on progress probation if the student has enrolled in at least 12 units and the percentage of withdrawals, incompletes and no credit entries recorded reaches 50 percent,” said Wendy Trujillo, public relations and marketing coordinator for College of the Canyons.

“Now they don’t open new classes, so students are left with no options,” said Lingrosso. “The last year and a half to two years, I’ve had 60 or 70 students that have tried to add each class.”

He thinks many students are taking community college classes in the first place for reasons that are not strictly academic, Lingrosso said.

“Some students, I’m sure, can be there for the (financial aid) money. Others because mom and dad said, ‘Hey you either go to college or you have to go find a job,’” said Lingrosso. “There’s no way for us to know what the intent was for any student when they enroll in class and so the hard part is we can speculate.”

Students like Reveles think that nothing can really be done to successfully prevent students from dropping classes and that the focus should be on getting students seats in courses they need to transfer.

“Students who need the class for a major requirement for transfer should get priority registration,” Reveles said.