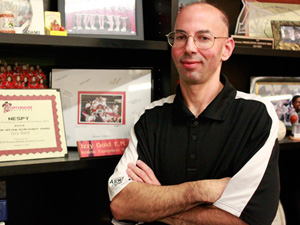 The sound of industrial washer machines and dryers turning, with the clanking of sport pads and uniforms tumbling on each other, is the only noise coming from Redwood Hall’s equipment room. Upon entering there is a faint smell of cleaning chemicals and musk. On the inside of the door is a poster of CSUN’s mascot Matty the Matador riddled with sloppy signatures praising a person named Izzy. Some read, “Izzy, I love you!” or “Izzy, you are the best!”

Isidore Gold, 39, who insists on being called Izzy, is the head equipment manager since 2001 for all of CSUN’s athletic teams. His face looks smaller with his huge prominent eye glasses, a throwback to the 70s. He is a thin man, weighing a proud 140 pounds and standing at 5 feet 8 inches. He comes into the equipment room pushing a cart of dirty baseball practice gear, hunched over with determination.

He is always on his feet. A man that is rarely seen not working, let alone outside of CSUN. However, it is rumored that he sleeps—albeit only for a few hours a night.

“I wouldn’t say it’s a hassle but it’s a lot of work. Your body has to be adjusted to being there those hours, being on your feet non-stop,” he said. “It’s constant, but I’m adjusted to it already.”

A typical day for Izzy usually starts at 7 a.m. He gets the uniforms ready, which usually takes two hours. Afterward, he does inventory throughout the day. Then comes the afternoon where there are usually a few CSUN games that he has to make sure the uniforms are prepped (cleaned and checked over to make sure there are no defects or damages). Izzy, then, puts the uniforms in the lockers and gets the towels ready. Towels, by far, are the most used items from the equipment room.

In addition to maintaining all the sports teams at CSUN, Izzy is obligated to clean and prepare the visiting teams uniforms and equipment as well. It’s a demanding job with extensive hours that leaves social life outside of work marginalized or non-existent. But Izzy is fine with that.

“Sometimes I work Monday through Sunday, seven days a week, [usually] when there are practices that go from Monday through Saturday, which is a lot of the times when they get back from a road trip,” Izzy said.

In his spare time he enjoys watching TV, usually ESPN. For college basketball, he follows UCLA. In the NFL, it’s the Chargers. For the NBA, it’s the Lakers. In the MLB, he has always followed the Mets. Having grown up in Brooklyn, it was mandatory to hate the Yankees and root for the Mets.

Despite his constant contact with athleticism every day, he doesn’t play any sports regularly, although he might shoot the basketball around every now and then. But he was younger, Izzy was an up-and-coming bowling prodigy.

When Izzy was 13 he bowled with a league in Brooklyn. Once during a youth league tournament in Queens, New York, he met and bowled with Brian Voss, former number one bowler of the nation. Voss went on to tell Izzy and his mother that he could go professional. Although he was honored, Izzy wanted to go to college and concentrate on education.

Izzy, his mother and grandmother, moved out to California in 1991. He finished high school in Chatsworth and started going to CSUN.

He was going into his junior year in 1993 as a kinesiology major when he first landed the job as a work-study student in the athletics department under the equipment manager at the time, Ruben Avila.

“And all of the sudden I just worked my way up,” Izzy said. “The department basically made a part-time position for me in 1999. I did two years as a part-time assistant staff while I was still going to school and got the job when he [Avila] left.”

Izzy is grateful for the opportunity, especially at a time when the family was struggling to make ends meet. He had to stop attending class and accepted a full-time position with the athletics department to help his mother out financially.

Although he is consistent in singing praise for the department and the position, Izzy regrets not finishing college.

“Not graduating in four years, on time, that was my biggest regret. Getting the job right in the middle kinda screwed me up,” Izzy said. “I would have loved to have done that.”

Izzy knows that it wasn’t really a choice. His family needed him. His grandmother was bed-ridden and his mother needed help.

“But eventually I am going to go back and finish up. At that point there was too much going on. I just didn’t have time. I’ll probably stay in kinesiology.”

In 2005, Izzy’s mother passed away from cancer. He got thin right after and dropped weight from 250 pounds to 140 out of a desire to live a healthier lifestyle.

But Izzy is not alone. He is helped in his duties by 18 work-study students.

Jessica Moran, a sociology senior, who works in the equipment room, enjoys working with Izzy but the sports teams are another issue.

“Something that I’ve learned here is to work at a fast pace. Sport teams expect things to be done quickly—some of them are rude, some are nice. One of the nicest people I know is Izzy. He’s always here, late. Never says no to anyone,” Moran said.

Vernet Ellison, assistant equipment manager and graduating senior majoring in sociology and journalism, is going to miss working for Izzy. She has been working for him for five years.

She cautions that Izzy is too nice and lends himself to being taken advantage of for being the guy that can never say no.

“He’s the hardest working guy in show business, the engine of the athletic department,” Stork said.

Facilities coordinator for the college of health and human development, Geoff Stocker, who has been coordinator for 15 years at CSUN was Izzy’s boss at one point. Stocker always sees Izzy working. Izzy is one of the most—if not the most important person—in the athletics department. Yet you don’t see him out in the field.

“You know the Wizard of Oz, the guy behind the curtain? Izzy’s that guy,” he said.

Michael Abalos, senior and goalie for CSUN’s men’s soccer team, knows Izzy by first-name basis. He points out the hard work that Izzy does, all behind the scenes.

“He’s here after every game, whether we win or lose,” Abalos said. “He asks how we feel at the end of every game. He supports us. Overall, he’s extremely important. We use jerseys and just leave them and we expect them to just be there. And they are, somehow. We rely on him. We have to play a game. We have to wear a jersey. Thirty-plus bags that he has to pack individually for our team: it’s a tough task. He’s the man.”