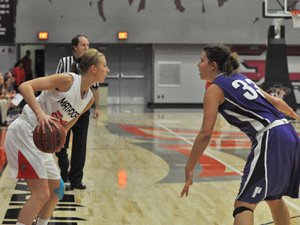 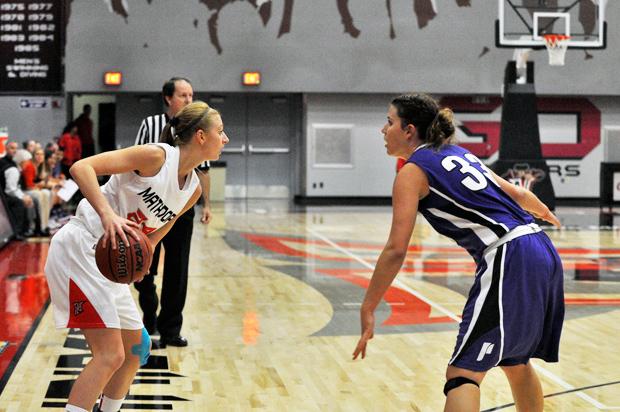 Opponents of CSUN’s women’s basketball team have got to be asking where the team got their new Italian engine, Marta Masoni.

Just seven games into the season, and it’s clear the kind of impact the freshman — who throws in 3-pointers like daggers — has had for the Matadors.

Not only does Masoni lead the team in minutes played and field goal percentage (42.2), she also leads the entire Big West Conference in three-pointers made (20), at a 40 percent rate.

“She’s been a pleasant surprise. She’s been even better than we anticipated to be honest,” Head Coach Jason Flowers said, noting how Masoni shattered his stigma about European resiliency with her tough play.  The evidence for just how much trust the decision makers have in Masoni may be reflected by all her time spent on the court, a 35-minute per-game average.

Masoni has played basketball, or “pallacanestro” in Italian, since she was 5 years old, and was ingrained in the Euro-style of play since she was 13.

In a recent 70-67 win over Santa Clara, Masoni led the team with 22 points, a season high that she’s already managed to hit twice. And while the victory indicates a larger team effort by the Matadors, the 3-point difference may be symbolic of the specific skills Masoni offers.

“I really like to make the best situation for a girl on my team. I don’t care (about)my points, but I really like creating things for my team,” Masoni said.

Flowers, however, praises Masoni for more than just her shooting ability. Her ball handling, passing and defense are bonuses to her maturity as a player and a person, according to Flowers.

“I just think with her skill set and her mentality and her experience; her basketball IQ, she could have a really good career,” Flowers said. “She has a different experience than anybody we’ve had since we’ve been here, with her extensive International experience.”

Masoni comes from an athletic family who’ve all played at a competitive level, but she might most resemble her mother Rita who, like Marta, played basketball for the Italian Women’s National Team.

But her transition to basketball may have been easier than the one to Northridge.

Masoni comes from Taranto, Italy, which she affectionately calls “my city,” and had received offers to play at Washington and Kansas State amongst others, but decided on Northridge. The weather may have been a big factor in her decision because of CSUN’s proximity to the beach. Masoni has an affinity for the sea and explains that when she’s back home she might be there from sunrise to sundown.

And even though California’s warm climate and brown-watered beaches may have been a draw, it was her family that ultimately convinced her to come.

“They said you have to go you have to try it, because it’s a very big opportunity for you,” Masoni said. “I’m Italian so I’m here to get this new experience because it’s completely different here – I had to try it.”

For Masoni, playing for the Matadors and all the goals that come with it weren’t the only reasons for moving to another country. She’s also here to pursue an education.

Her other goal? Being a brain surgeon.