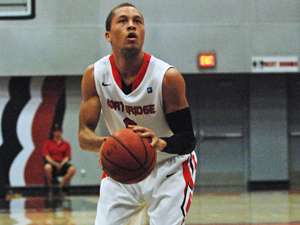 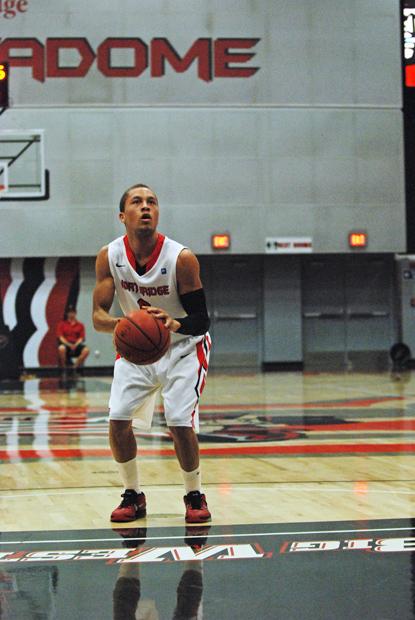 Sophomore guard Josh Greene broke the CSUN school record Wednesday night with 33 straight free throws made in the Matadors’ 120-69 win at the Matadome.

The streak, which spanned seven games, was just one of many highlights in a romping that saw the Matadors (7-2) shoot 70 percent in the first half en route to a huge 58-37 lead over the Lions (6-5).

“It felt good when I did step to the line,” Greene said. “To be honest, I did think about it a little bit…I’m just glad I was able to put my stamp on history.”

Northridge, led by Stephan Hicks and his double double of 23 points and 11 rebounds, easily cruised to victory as CSUN had six scorers in double figures.

Hicks got the scoring started with a breakaway jam off an intercepted Vanguard pass and set the pace on defense for the Matadors.

Both teams were even at 21-21 before the Matadors put on an 11-point run to widen the gap and force a Lions’ timeout.

“We were focused throughout the whole game and there were some stretches that we turned it up offensively,” Greene said. “If you let teams like that hang around they can end up beating you.”

Hicks and Maxwell weren’t going to allow the Lions back into the game.  They powered CSUN offensively, scoring 13 and 10 respectively, as the Matadors kept their distance despite turning the ball over nine times in the half.

“We looked at their size and just wanted to get to the glass,” Hicks said. “We needed to get those offensive boards and we did.”

Northridge further extended its lead in the second half with solid play from freshman Landon Drew and Tre Hale-Edmerson and pulled ahead by as many as 52 at one point.

Vanguard’s sophomore Preston Butler tried to will his team back into the game with some motivational war cries but the Lions’ offense continued on without as much as a purr, shooting 37 percent.

The crowd went wild as CSUN hit 100 points, handing all fans in attendance a free combo at The Pub.

CSUN let off the offensive pedal and let the bench players nab some minutes as they cruised to the 120-69 final score.

Northridge gathered 32 assists as a team, which was a different scene than the one fans saw against UCLA in the Matadors’ last game, and also outrebounded the Lions, 49-25.

“We asked our guys to focus on the things it takes to be a good team and not necessarily on who we’re playing,” said head coach Bobby Braswell. “We knew tonight, if we weren’t careful, could be one of those nights that you come out and lay a big egg because we weren’t playing UCLA or BYU.”

The team was happy to gather its seventh win of the season, the same amount of wins CSUN had all of last year.

“It’s been a long time since we had won,” Braswell said. “We just wanted to make sure we got back on the right track and I think these guys were able to focus on the right things…Guys were worried about playing good team basketball which we did tonight.”