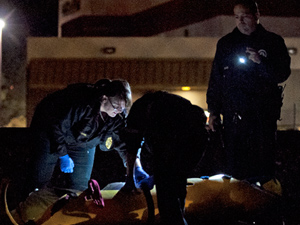 >>>CORRECTION: The man was killed by a Metrolink train, not a Metro train.

>>>UPDATE Dec. 7 11:11 a.m. The victim has not yet been identified and reports are not complete, but he was a caucasian male that appears to be in his thirties, said Larry Dietz, watch commander at the Los Angeles County Coroners Office.

>>>UPDATE 7:45 p.m. Andrew Chick, of the Valley Traffic Division, said that after reviewing the tape, they believe it was a suicide because the man ran to the tracks and laid down. Chick said he has come to the site for two other suicides done in the same manner. One was in 2007 and the other was in 2010.

A Metrolink train hit and killed a pedestrian today in Northridge at Nordhoff Street and Tampa Avenue at 4:45 p.m.

A male that appears to be about 20 years old was standing on the train track under the Nordhoff bridge when he was struck, said Mike Zabowski, member of the Valley Traffic Division.

“We reviewed video from a camera on the front of the train and are currently investigating it as a traffic collision, but it could possibly be a suicide,” Zabowski said.

The driver of the train saw the pedestrian but was not able to stop in time, he said.

“It takes a couple miles or more to stop a train,” Zabowski said. “They did see him and try to stop and warn him with horns.”

Zabowski would not comment on what about the video lead officers to consider it may be a suicide because it is still under investigation.

Tampa Avenue is currently blocked between Nordhoff Street and Parthenia Avenue, Zabowski said the street would clear once the coroner and replacement train crew arrived.

The train crew operating the vehicle at the time of the accident can’t drive because of possible mental health issues associated with being part of such a tragedy, Zabowski said.

The 19 passengers on the train at the time of the accident were unharmed by the emergency stop and were taken by bus to another local train station, Zabowski said.

There were no other witnesses, he added.