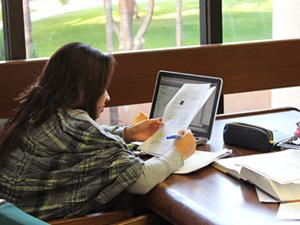 With winter break around the corner, students are anxiously awaiting time to catch up on extra sleep and watch a DVR full of unwatched shows. Although weeks full of relaxation may sound appealing, there may be evidence that continuous schoolwork may make a student’s academic performance higher when the next semester begins.

Cheryl Spector, an English professor who specializes in college success and the freshman transition, said students’ math skills get rusty after a long break.

“Students who meet basic high school graduation requirements for math in 10th or 11th grade, then take no math in 12th grade, take the ELM (Entry Level Mathematics) assessment and often score very low because they have not reviewed or attempted math in months or years,” she said. “This is a big issue for incoming freshmen here at CSUN.”

Katherine Stevenson, director of CSUN’s developmental math program, agreed with Spector and said she noticed some patterns among students who do not keep up with course material between semesters.

“In general, the agreed-upon wisdom is that students are better off continuing in math courses until they complete their math requirement because it’s just a cumulative skill set, and taking a break from it can cause a lot of back pedaling to occur,” Stevenson said.

Although Stevenson noted patterns she witnessed with students who were in CSUN’s developmental math program, she added that those trends serve as a representation of the larger picture of students’ academic behavior.

“Those students would be an example of how that kind of activity is functional for our students to participate in,” Stevenson said.

In order for students to benefit from keeping up with academics during a break, Stevenson said, they must set clear goals that will help them during the next term in some tangible way.

“(Students should) find some authentic way for preparing for spring courses that help them pass those courses but also leave enough room to relax,” Stevenson said. “Some students only sleep and watch TV because they need down time from such a high anxiety level.”

Signs of an academic slump after a vacation seem to exist not only at CSUN but also in public K-12 schooling, according to Ivan Cheng, professor of secondary education.

Cheng, who used to teach in the public K-12 system, said a definite trend exists for K-12 students regarding whether or not their academic performance suffers after a summer or winter break.

“When kids come back in the fall, they tend to have what is known as the ‘summer dip,’ when they have lost skills and knowledge,” Cheng said.

He added students who take summer school tend to do better academically when they return in the fall.

He added that there is also a performance dip after winter break, which typically has no school offered for K-12 students since it lasts only a couple of weeks.

“Students tend to not remember as much immediately,” Cheng said, “but it comes back eventually.”