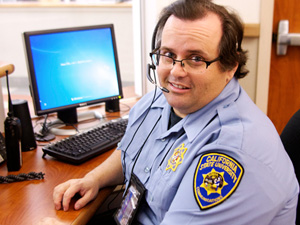 Tom Cavanaugh did not expect that his donation of $100 worth of coffee for the Newtown General Store’s patrons would be the first drop in an outpouring of kindness to the grieving town.

Cavanaugh, a night dispatcher for the Cal State University Northridge Police Department and a New Jersey native, said that he saw the general store in some of the media coverage last week and thought about how best to help a community coping with inexplicable tragedy.

“That was the day of the first funeral – the town is going back to normal, but their brain won’t be normal, their mind won’t be there,” said Cavanaugh. “So I figured, what is normal back home, the east coast where I’m from, is we would get up in the morning, go to your deli, get your morning sandwich, get a cup of coffee. In this case, I couldn’t afford to buy them all sandwiches or breakfast, but I could buy them all a cup of coffee. And I thought that would bring some type of normalcy that a cup of coffee brings – it’s like a cup of normalcy.”

He posted the store’s information on his Facebook page, encouraging his nearly 1,000 friends to give whatever they could to the store, and donations such as candy, doughnuts and sandwiches came flooding in from around the nation.

As in other interviews, Cavanaugh said that his Sicilian-American mother taught him to send prayers and food to those who have lost a loved one. However, this particular tragedy pulled at heartstrings rooted deeply in his own personal experience with losing a family member to a monstrous and senseless act of violence.

When Cavanaugh was in his senior year of high school, his 82-year-old grandfather was killed while alone at his home, beaten to death with fenceposts by three teenage boys.

“Why they went after him I don’t know, it’s always bothered me,” said Cavanaugh. “When I saw what happened there, that the shooter reached the door and killed those kids and teachers, I realized that the victims’ families will feel that question that I still have. The parents may wonder, what was my child thinking? Did I let them down?”

Cavanaugh said it was his dilemma with the darker side of humanity which motivated him to donate to Newtown. But this is not the first time Cavanaugh has done something to try and help people cope with death and grief, particularly in the context of a mass shooting.

Dispatcher by night and writer by day, Cavanaugh won an award in 2006 for an original play titled “Behold,” – a tale based on the emotional challenges that families of victims experienced after the 1999 Columbine high school shootings. After doing his own research, Cavanaugh illustrated the burden of monumental grief and psychological traumatization that survivors must carry, a difficulty that puts people and communities through the fire.

Cavanaugh’s hopes that the kindness of others can make it a little easier for the Newtown community to get through the coming trials, but he knows that the process of grieving, especially for a young one, can be just as gruesome as the murder itself.

“I can’t imagine what it is like to lose a child, I just can’t imagine,” Cavanaugh said. “A lot of hard times are going to happen to the parents, a lot of pain. Burying is the worst, but after that it can get really ugly. These were children murdered with assault rifles. What do you say to the parents of all these 5 year olds, who died for no reason?”

Now a week after the fatal incident, Cavanaugh thinks that if people want to help the Newtown community, they should do it in the least invasive way possible. Although he is genuinely moved by others’ donations following his own and appreciates the general store’s thank you sign posted the day he bought the cups of coffee, he never intended for the attention to be on him.

“I think it’s time to let Newtown rest and heal,” Cavanaugh said. “The truth is, I gave [the store] my name and phone number not to put it on the sign, but because the woman was so shaken up and had trouble writing down the credit card number. I’m happy the way it turned out the way it did, but I didn’t expect it to turn viral; this isn’t about me, this is about them.”

Cavanaugh, a big believer in the power of the kindness of people, wants to remind others that they can always do positive things to help those in need, all the time.

“I really do believe that if you use whatever gifts you were given, your talents, and you make it a little better for the person next to you, you actually make the world a little better,” Cavanaugh said.

Cavanaugh himself has been inspired and touched by another person who started a trend of doing 26 acts of kindness for each victim killed by the gunman. To get away from all the attention surrounding him, Cavanaugh had lunch at a cafe in Beverly Hills on Wednesday, and saw one the 26 acts in action.

“A woman was having lunch next to me and she was trying to pay her bill, and the waiter said that it’s okay, it’s already been paid,” Cavanaugh said. “He handed her a piece of paper, and on it was the 26 names of the 26 victims. And the guy said, that’s because of the one guy who bought the coffee we’re doing this.”

“I asked to see [the paper] and I started to cry, and the [cashier] said, are you alright? And I said yeah, I’m the coffee guy,” Cavanaugh said. “Somehow this got connected to me, and I guess it is part of the movement and it’s beautiful.”