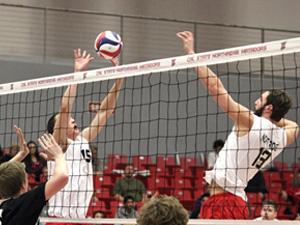 The 10th-ranked Matadors (3-1) men’s volleyball team earned their third win in a row after sweeping Grand Canyon University (2-3) Friday night, shutting out their opponent for the second straight game.

Northridge completed a flawless non-conference schedule and extended their win streak at home to three on the season.

Ryan Mather, Grand Canyon’s sophomore middle hitter, scored the first point of the match to start the Antelopes off strong. Mather continued to put the pressure on the Matadors with four swings and four kills, putting the Antelopes up 11-8.

CSUN had trouble scoring and the game’s tempo shifted in favor of the Antelopes during the set, but Northridge continued to stay alive.

Looking like the set was out of reach with a five point deficit, the Matadors mounted a comeback. Northridge finished with a 7-1 run, winning the first set 25-23 that gave them motivation throughout the night.

Struggling to dig many of the Antelopes kills down the middle in the first set, head coach Jeff Campbell made the necessary adjustments in the last two sets to come out on top.

“They went to their middles a lot in set one and we really couldn’t stop them,” said Campbell in an interview with www.gomatadors.com. “They hit a lot of off-speed roll shots and tips that we did not do a very good job defending. I thought we made some adjustments and really started serving and defending better in games two and three.”

The Antelopes forced another tight match early in the second set but, Northridge pulled away with the lead, taking the set 25-18.

Steadily improving throughout the match, Northridge took its hitting percentage from .194 to .609, to overwhelm Grand Canyon.

Taking the early lead in set three, the energy in the Matadome was high as the Matadors had their strongest set of the night. Senior middle blocker Jared Moore spiked it off the head of an Antelope player to seal the win for the Matadors, 25-20.

“Anytime we play non-conference events there is pressure to win,” sophomore outside hitter Kyle Stevenson said. “I am new to the lineup and excited to be on the court and get the time.”